The Starts To The New Year

I really should be finishing some of the projects I have out there but, decided on some new starts.
The first one is a freebee from Lianne van Leyen of 1897 Schoolhouse Samplers called Louisa Acton,  Age 11.  I'm doing it on 40 count Heritage Newcastle Linen from Picture this Plus, I think.
I'm using  Classic Colorworks:  Barn Doo, Cocoa Bean, Dublin Bay, Ye Olde Gold and Weeks Juniper.  Initially, I thought I would use Pea Pod but, I didn't like it so I ripped it out and started with the Juniper and I think I like it better. 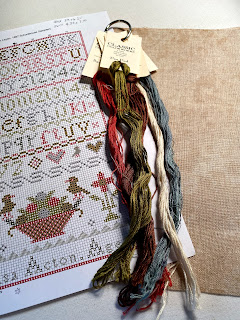 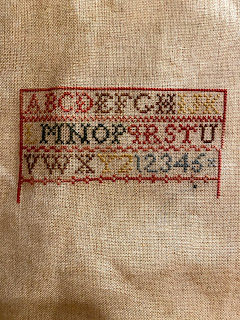 I also started on Mary Miller 1842 from The Scarlett House.  I had ordered the kit from The Country Sampler in Spring Green.  I love the colors of this.  I wasn't sure I would like the Weeks Verdigris and Teal Frost but, I really do.  I am using the called for thread and 40 count Buttercream from Lakeside Linen. 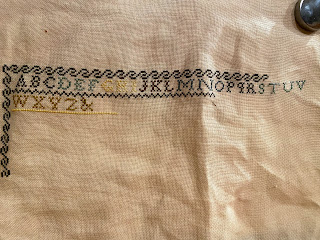 I'm having a hard time deciding which one to work on each day because they are truly fun stitches. 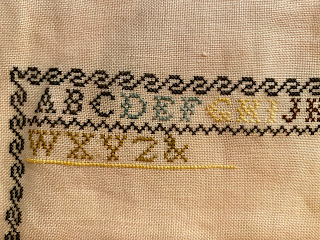 It has been an interesting weekend.  Bob's mom took a little fall on Thursday.  She really didn't start having problems until yesterday.  She needs help with dressing and bathing at her Assisted Living.  The aide was getting her ready for bed (before dinner since she gets into bed right after supper.)  Bob took her the ED at about 430 yesterday and got home a little after 8 last night.  It always takes four hours.  They aren't exactly sure if its a Rotator Cuff tear or a bone chip fracture at the head of the humerus.  She is in a sling and swathe immobilizer and will need to follow up with an Orthopedic doctor.  We really aren't interest in pursuing surgery.  She is going to be 91 in February and probably wouldn't survive the surgery and then the amount of Rehab is tremendous and she isn't capable of participating that much.  Will have to see what the Orthopedist says.

We got another three inches of snow today.  We had seven inches last Monday.  We had a lot of melt around Christmas with unusually warm weather and fog.  Fog always makes snow melt faster....don't know why.

Final tally for Hallmark Christmas Movies:  Hallmark channel  66/95,  Hallmark Movies and Mystery 27/81.  My family think I'm crazy.  I would have gotten a few more in but, Bob could only tolerate so much.  Pooh on him!

Finally, started watching an interesting series on Netflix:  Messiah.  Only watched two episodes but, its interesting.

I think that wraps it up.  Hope you have a good start to the New Year.
Keep on Stitching
Monica
Posted by Monica at 4:10 PM