Ther is a wonderful give-away at Victorian Motto Sampler Shoppe Give-Away.   I have won some floss from her and purchased trim bags.  Her trims are wonderful.

His Eye on the Sparrow Update

It has been a very busy week with my mom.
I haven't been working on His Eye on the Sparrow as much as I would like.
I have only a few more apples left on the Tree of Knowledge.
I do love this stitch. 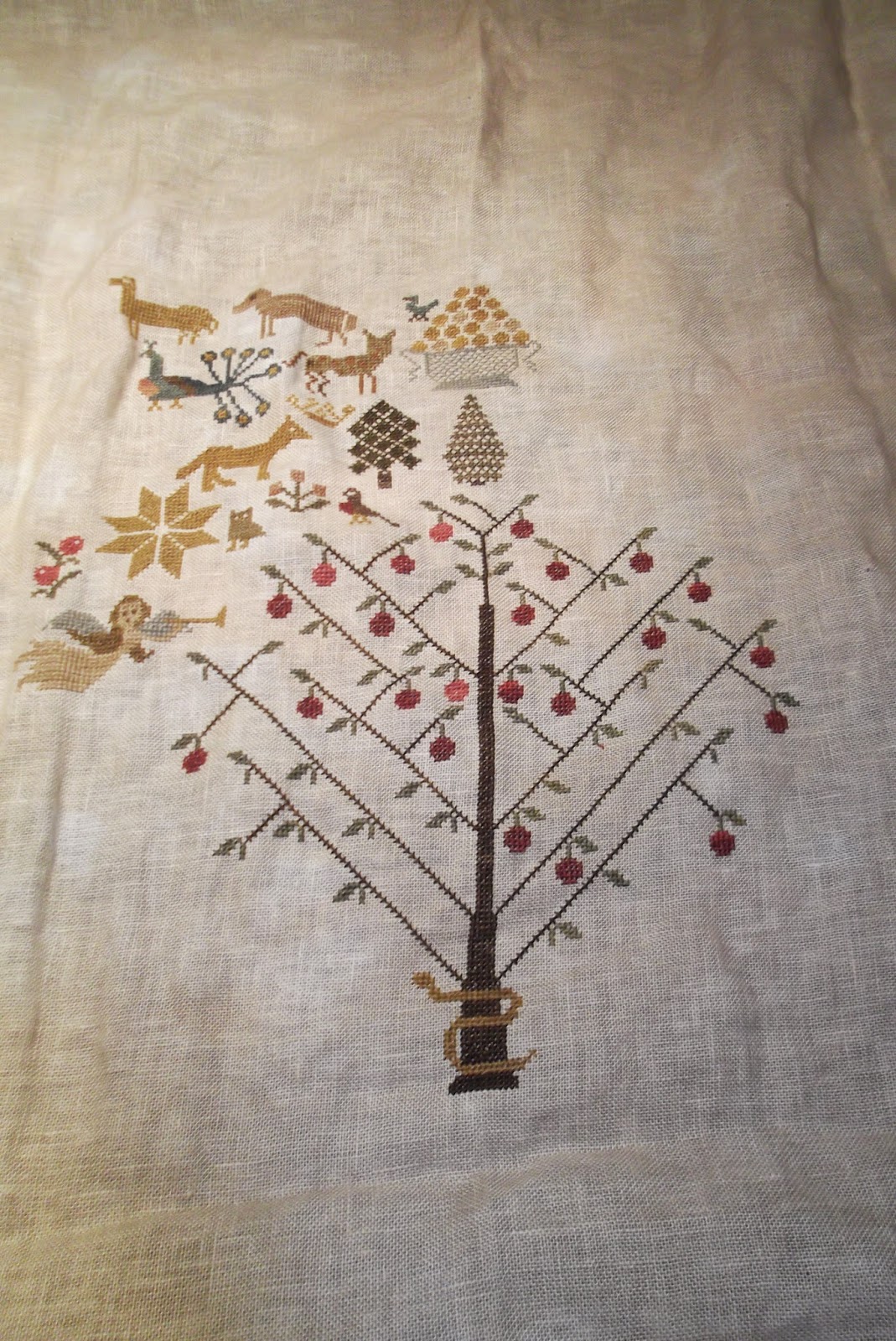 The top picture looks more true to color.
The picture below was straight down. 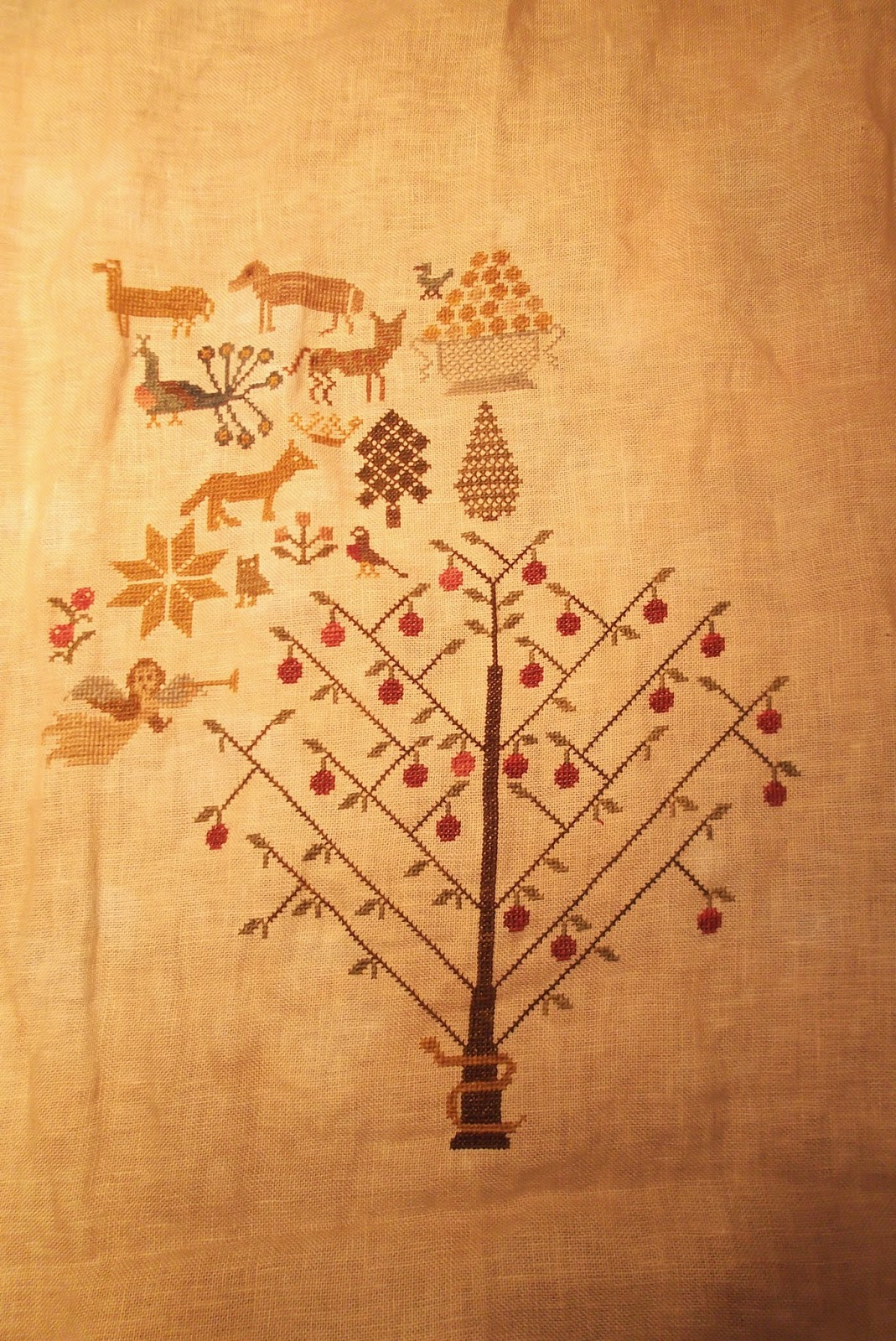 I have also been working on a scarf with a chunky alpaca yarn.
It is so soft, its unbelievable.

Been busy with my mom.  We finally got a phone call from the Assisted Living we looked at.  It is the style she wanted, a studio with a walk in shower.  It has a kitchenette, a sitting area and a sleeping area.  It is freshly painted, clean and waxed.  We saw a few furnished ones to get an idea of how much will fit in.  It will be quite homey and cozy.

She's feeling not so sure about it.  I think it is more the prospect of change.  Ultimately, I told her, I think that once she is settled in, she will feel a weight off.  She is worried about selling her house.

My son's take on the whole thing is, "Its a lot like living in a college dorm except there is less beer and more drugs."  Gotta love Ed.

The next few weeks are going to be very busy.  I need to call the nurse tomorrow and set up an interview.  I'm sure they want to make sure she wouldn't be more appropriate for the memory care area.  Her short term memory isn't stellar (sometimes mine isn't either) but, I don't think she has Alzheimers.  Then the ball will really start rolling.  I'll need to get some guys and a truck movers, do some organizing a packing, then get a realtor and maybe talk to an auctioneer to see if it is better to go that route or just an estate sale.  I also have to talk to the financial guys and start moving money around.  I may need a vacation after this.

It has been really cold and we are all getting winter weary.  I don't think it got above 0 today.  Thursday when I got up it was -24.  That is painful.
Hope the weather it better where you are but,  I think that may be Alaska.

Keep on Stitching
Monica
Posted by Monica at 5:02 PM 3 comments:

I worked on my His Eye is on the Sparrow at stitching group Wednesday night.
Thursday morning while laying in bed, I had a panic attack....
"Oh crap I don't think I have enough floss for this thing.  I've only done about a page."
The pattern is just short of twelve pages. 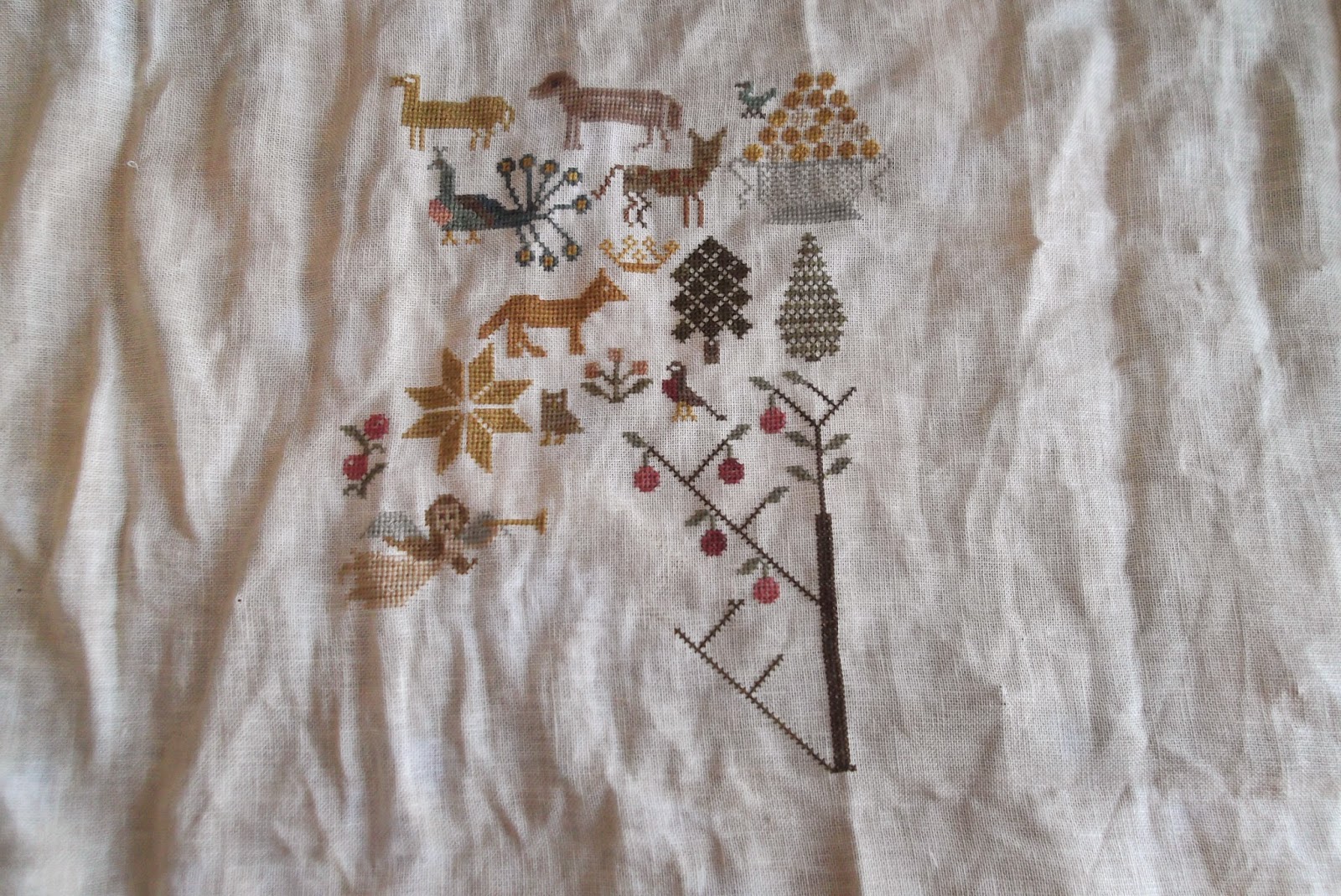 I'm doing it on 28 count linen over two threads.  Because of that, I'm using two strands of floss.  I wouldn't have the coverage if I used only one thread.  I posted on the FB page, what to do?
1.  Rip and and try one thread...not a good solution
2.  Start over on smaller fabric like 36 which would mean buying a new piece of fabric
3.  Suck it up and buy more thread.
Of course this would mean a road trip or ordering fabric or floss. 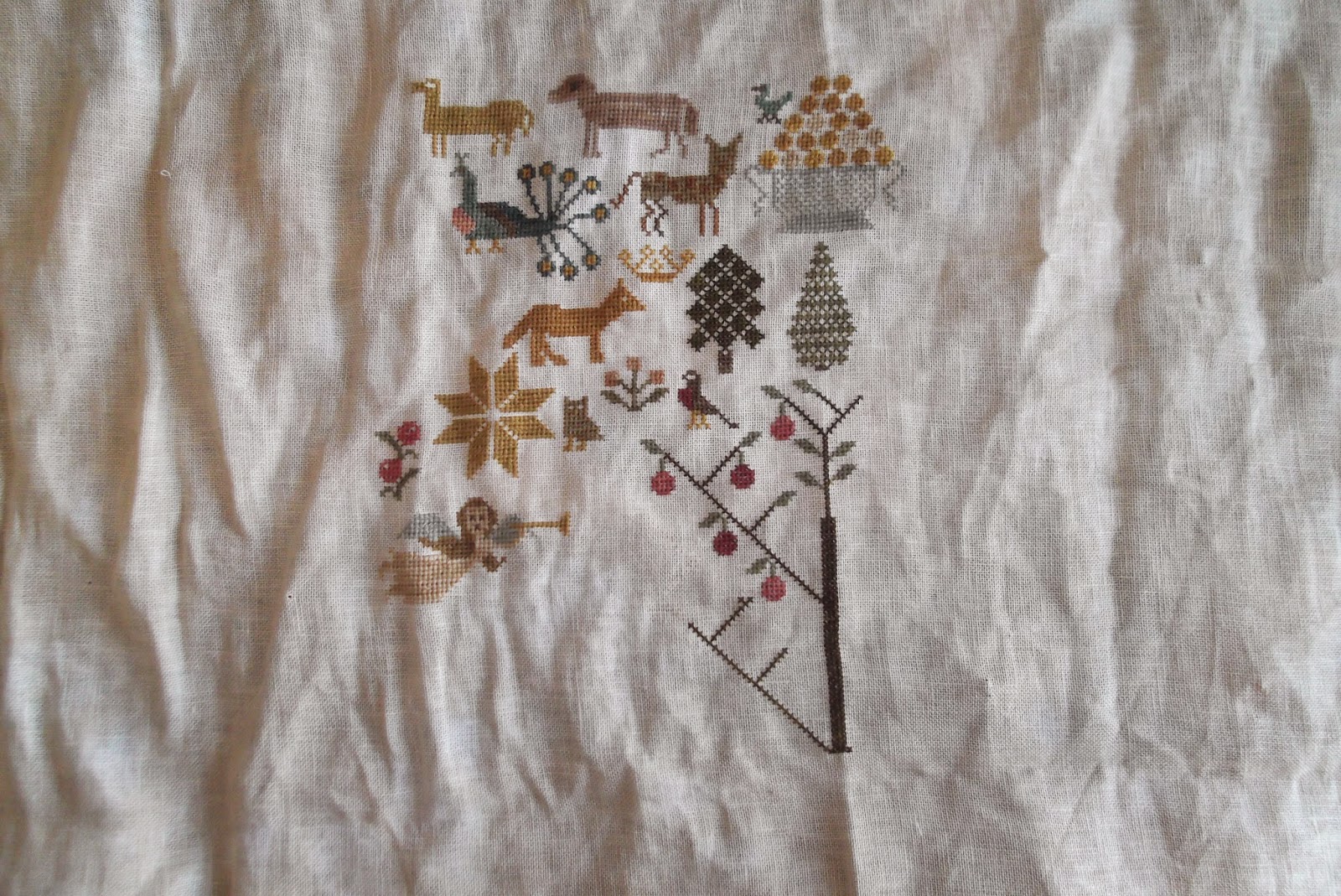 I went through my stash and had some of the extra floss I may need.  I decided to buy more floss.  That seemed to be the consensus on the FB page.  The group has a trip planned for 2/21/15 but, my buddy Arttie won't be able to go since her step daughter is competing at Cheer competition and she is going to that.  Having the day off and being me, I'm always up for a road trip.  We went.  I also figured if we didn't go, there will be a snowstorm and we won't be able to go.  If there isn't, I'm always up for a road trip.   There were some things I needed to get and I needed my sewing consultant with me.  We did have fun! 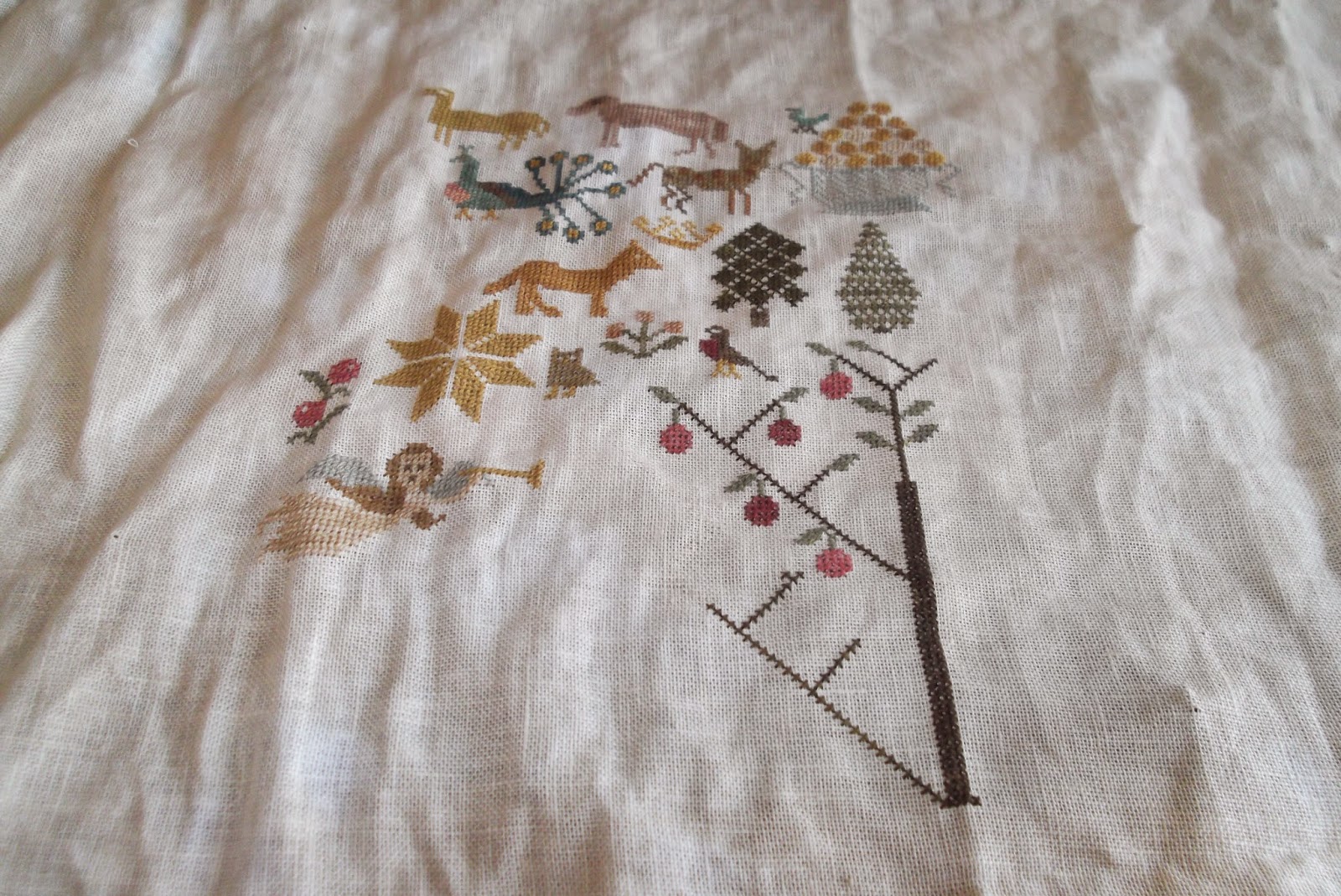 My progress on the piece.

Kendra from the Stitching Bee is going to market this year.  I have placed an order with her for some of the show exclusives.
My list:  Stacy Nash Cherry Hollow Farm
Chessie and Me:  1801 House
Nikyscreations:  Seasonal Band Sampler
With Thy Needle and Thread:  Summer at Cherry Hill
Plum Street Samplers:  Sampler Lessons (Serial Bowl Collection)

It has been unbelievably cold here.  Today was warm, 5 above 0.
Yesterday the high was 1 with wind making the windchill -24 to -30 all day.
I did not leave the house.

Hope you had a wonderful Valentine's Day.
Have a great week and thanks for the wonderful comments.
I love hearing from you!
Keep on Stitching
Monica
Posted by Monica at 3:32 PM 3 comments:

I'd Rather Be Cross Stitching

Just noticed the big ole hole in the screen...Thank you Henry Ford!
Well as a first attempt at piecing, I think I did pretty good but.....
I'd rather be cross stitching. 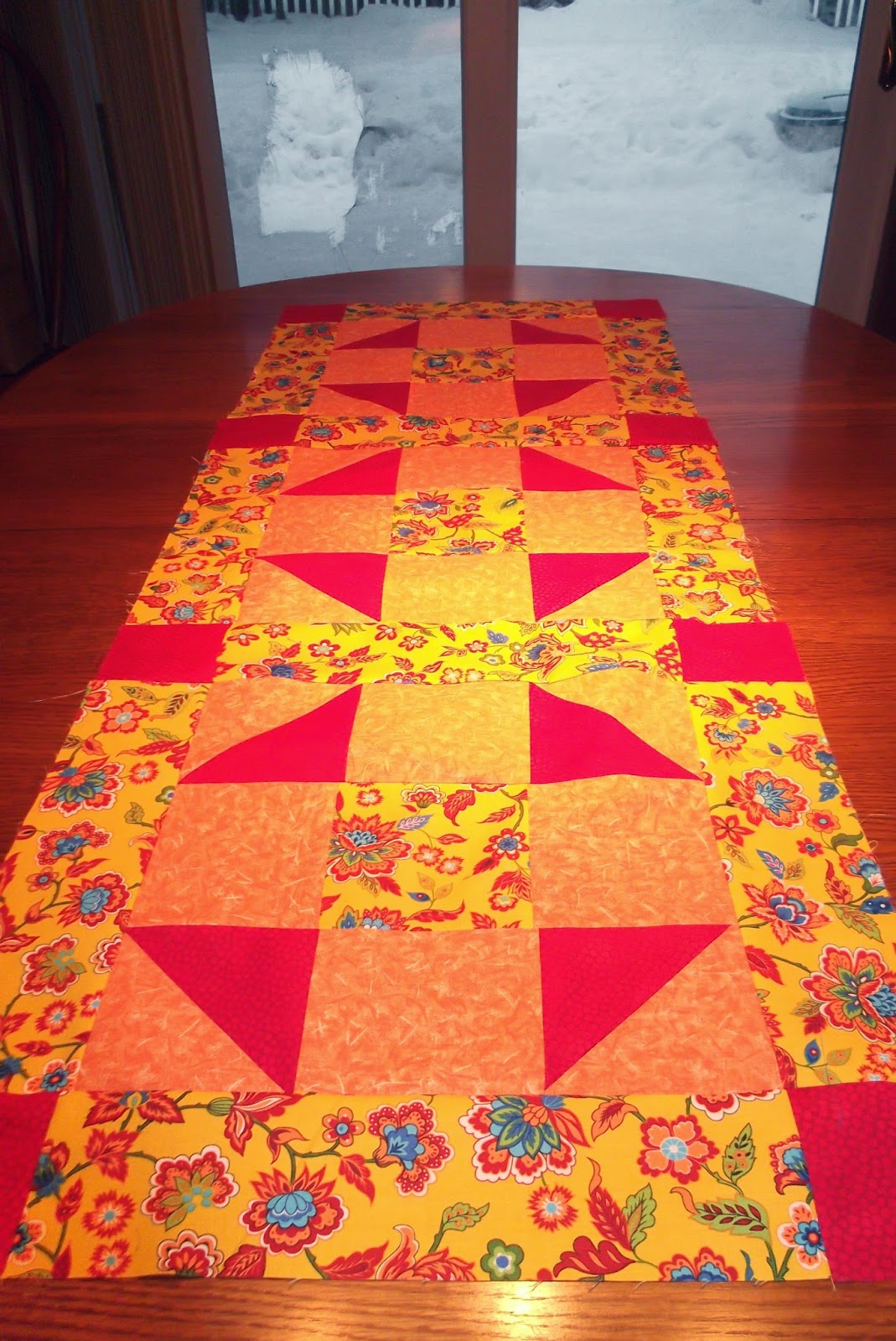 I figure I have at least 10 hours in to this and I don't even really like to sew.
Quilting requires a love of sewing at a machine.
I can honestly say, I don't enjoy that. 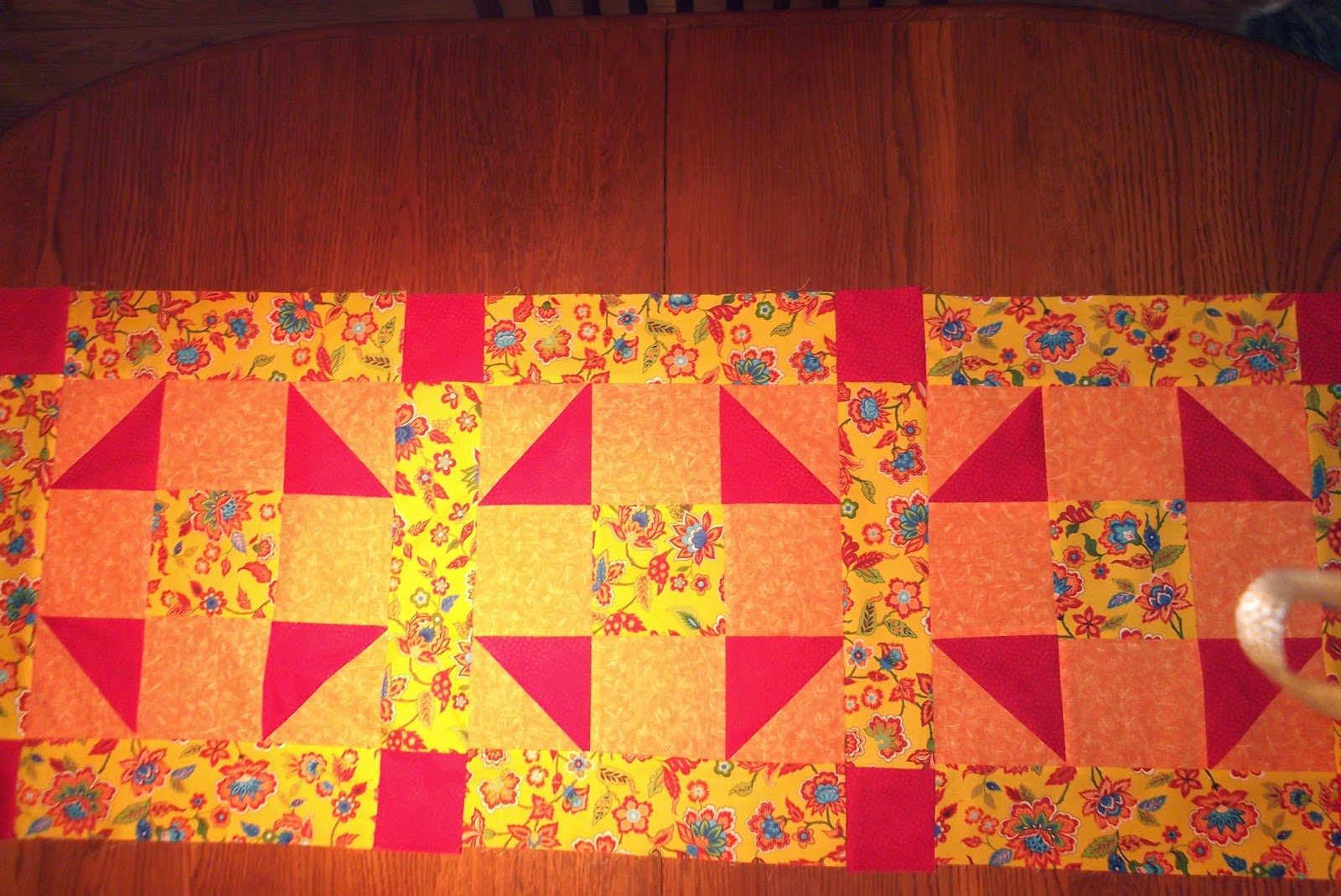 I am glad I did it so my mom has something to do other than "Putz around the house."
I'm not exactly sure what that means.
I'm an occupational therapist and I do honestly believe that no matter what age, people need to be productive and have some purpose.
I do believe that when she does have a project to work on, she is much more clearer in her thinking.
One other thing, the nice bright colors, everything around here is white and grey.  :( 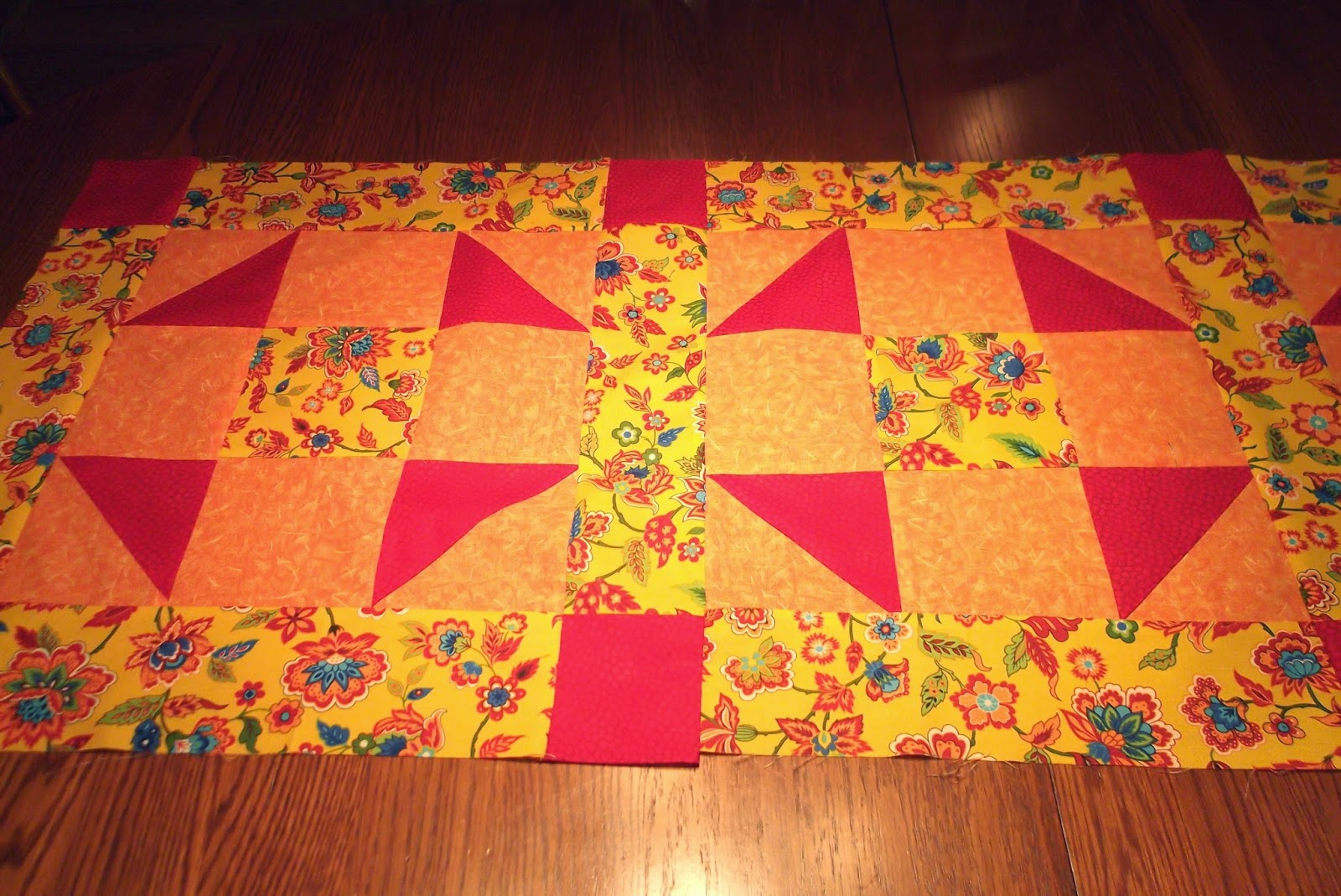 Did some shopping for her then went down to her house today.
We got the back and filling cut and pinned with the top of the table runner.
Will do the placemats sometime later if she can't do it herself. 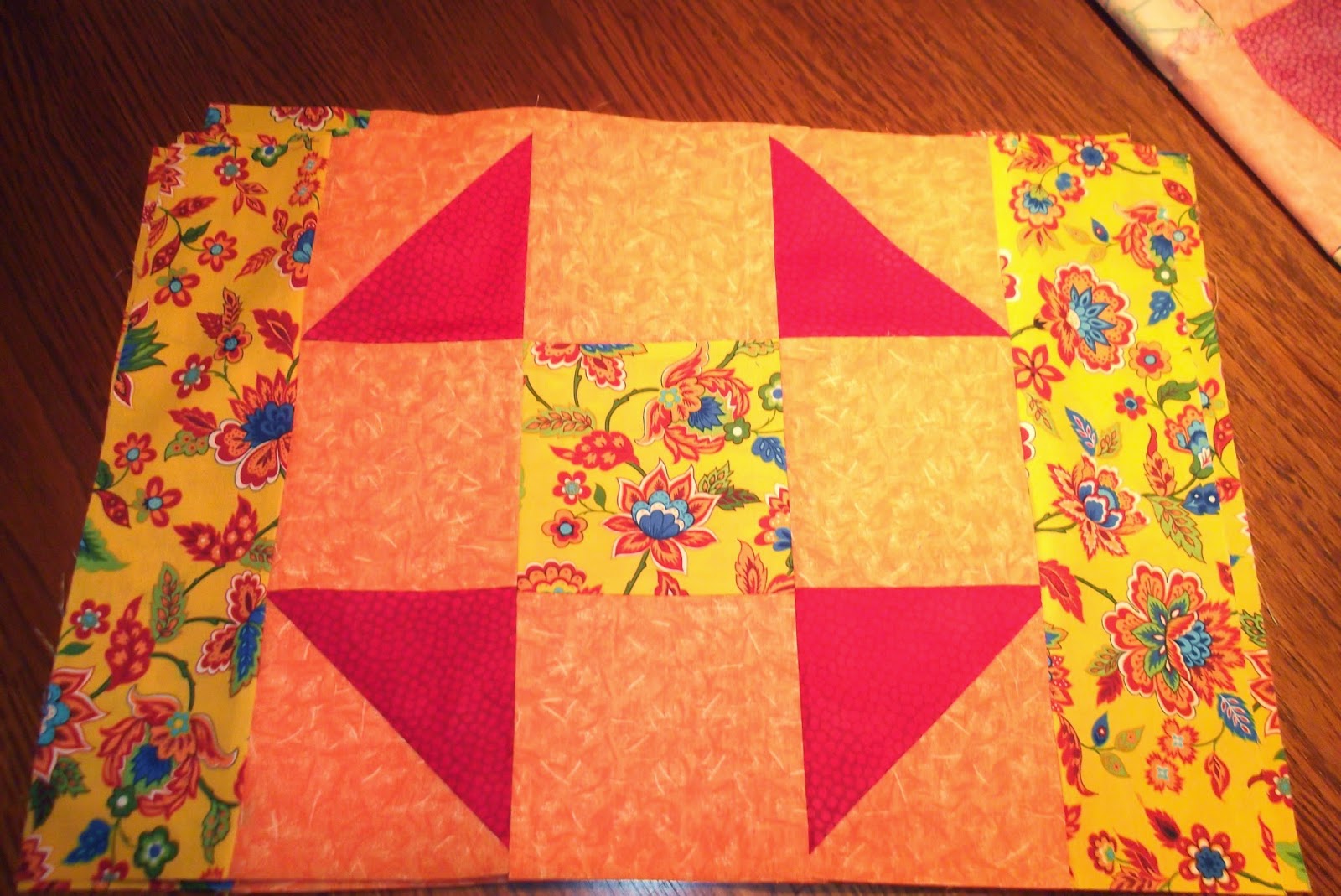 I helped her finish the bag she was making for her friend.
She just can't do some of that more sophisticated process.
I talk her through it.
She'll be able to do the finishing hand work, the binding and putting on some buttons to help reinforce the handles.
She did all the hand quilting and did a good job at that.
It turn out very cute.  I should have taken a picture.
It is very good to work together and I know that means a lot to her.
It means a lot to me to be able to do this for her even if I'm grumping around about it.

Hope you had a great weekend.
Mine was even with that quilting!

Thanks for stopping.
Keep on stitching
Monica
Posted by Monica at 3:55 PM 6 comments:

I think I have talked about my mom who will be 88.
She use to be an excellent quilter but, as she has aged she has really lost her ability to do the most of the piecing.
She can still do the quilting.  She has been able to do a Split Rail pattern but she wants to do something different.
She wants to make her friends and people who have been important to her gifts.
The latest was a book bag for her hair dresser who admired her book bag.
I helped her last weekend get the pieces going the right way.
Her sister helped with cutting out the pieces.
Its given her something to work on this week.
I really think, that she is better mentally when she has some quilting to do.
A friend of mine is making a top for me for a bed throw my mom will quilt.
In the meantime, I figured I better get something together for her.
So, I thought how hard can this be?
I had bought some material this past summer to have her make something since, it had a bigger pattern on it and she could quilt around the flowers.
Since, I helped her last weekend, I figured I could make a table runner and some placemats.
It is a very simple nine patch square.
Making triangles. 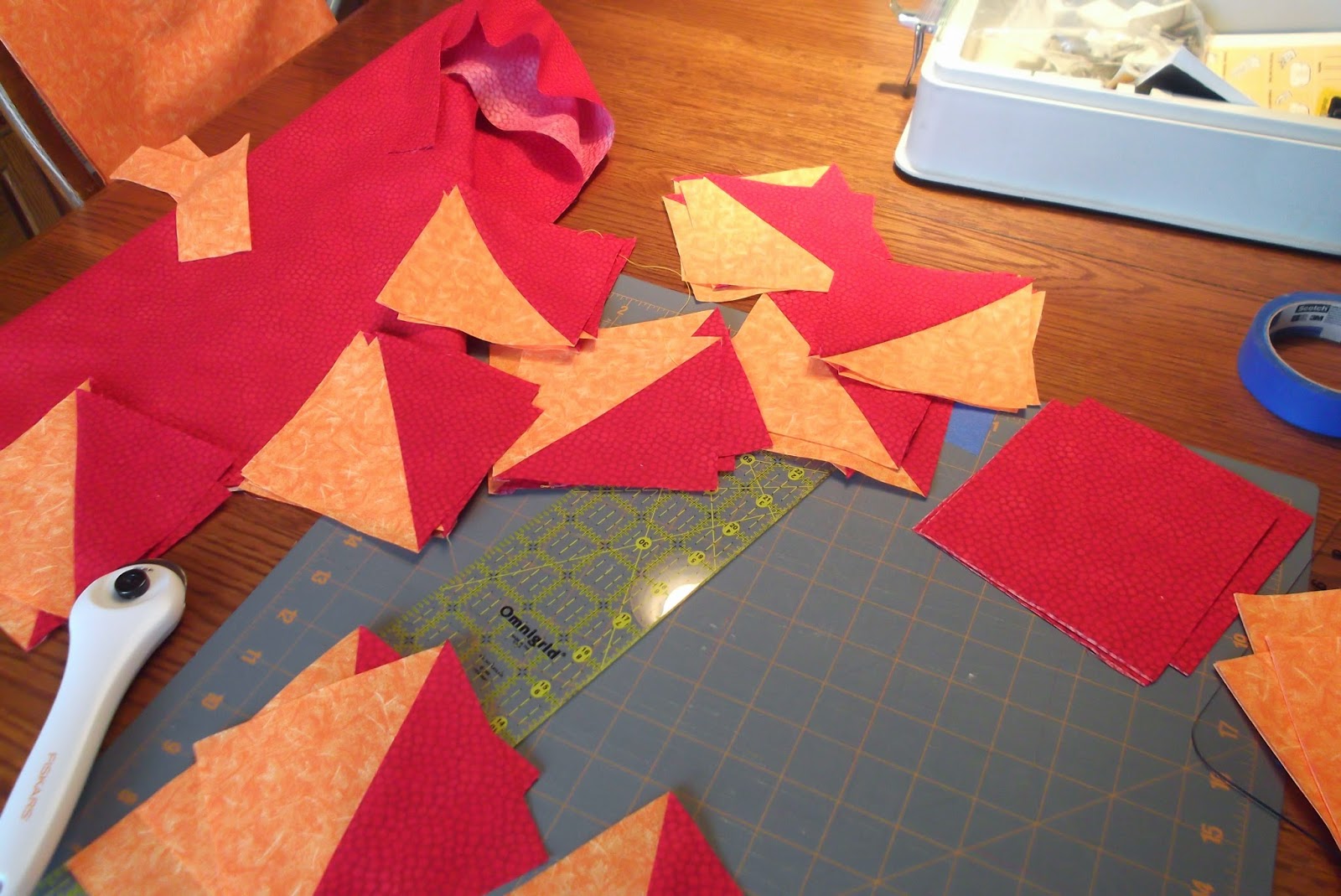 I have one square put together. 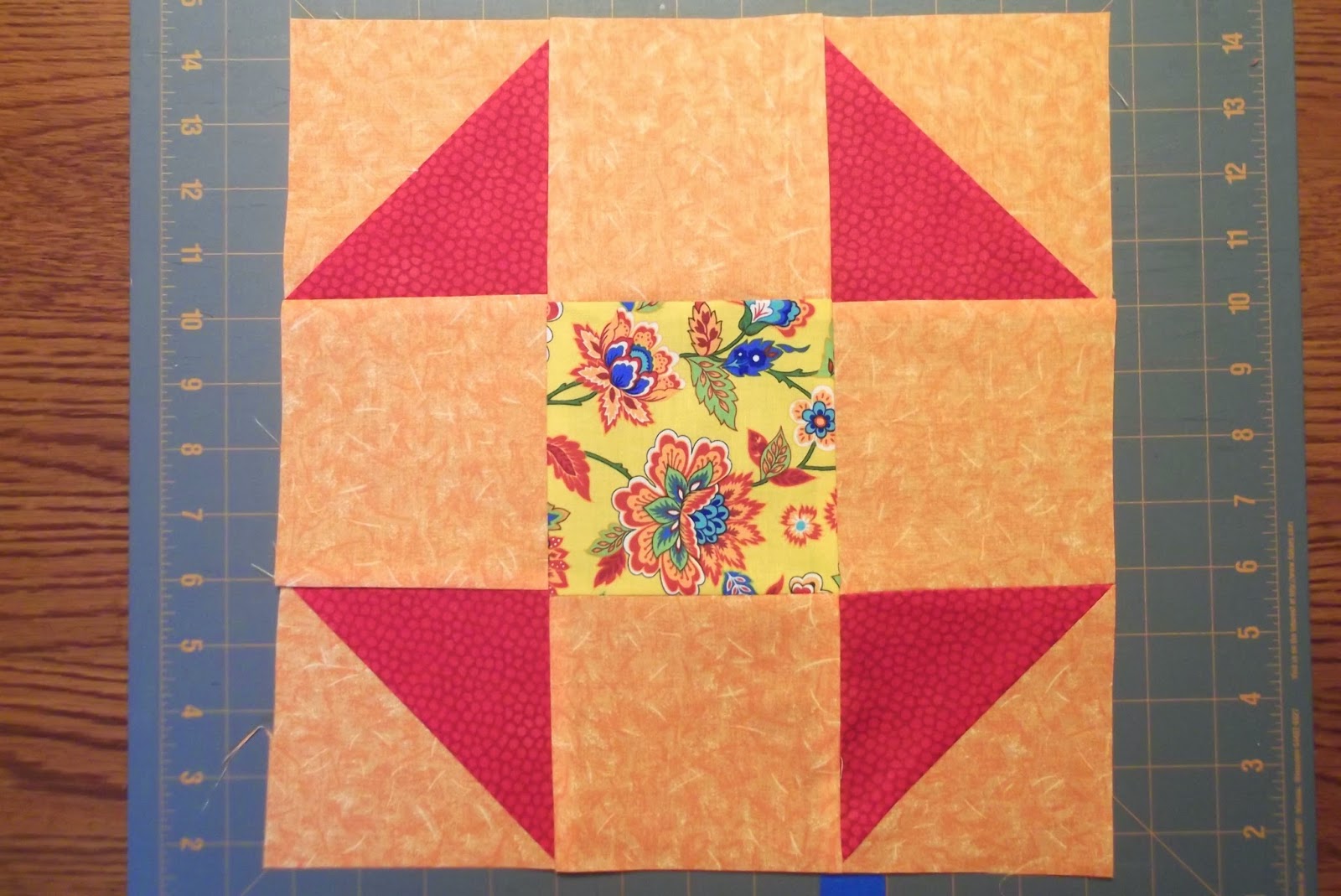 Looking at it, I might have changed some of the fabric around. 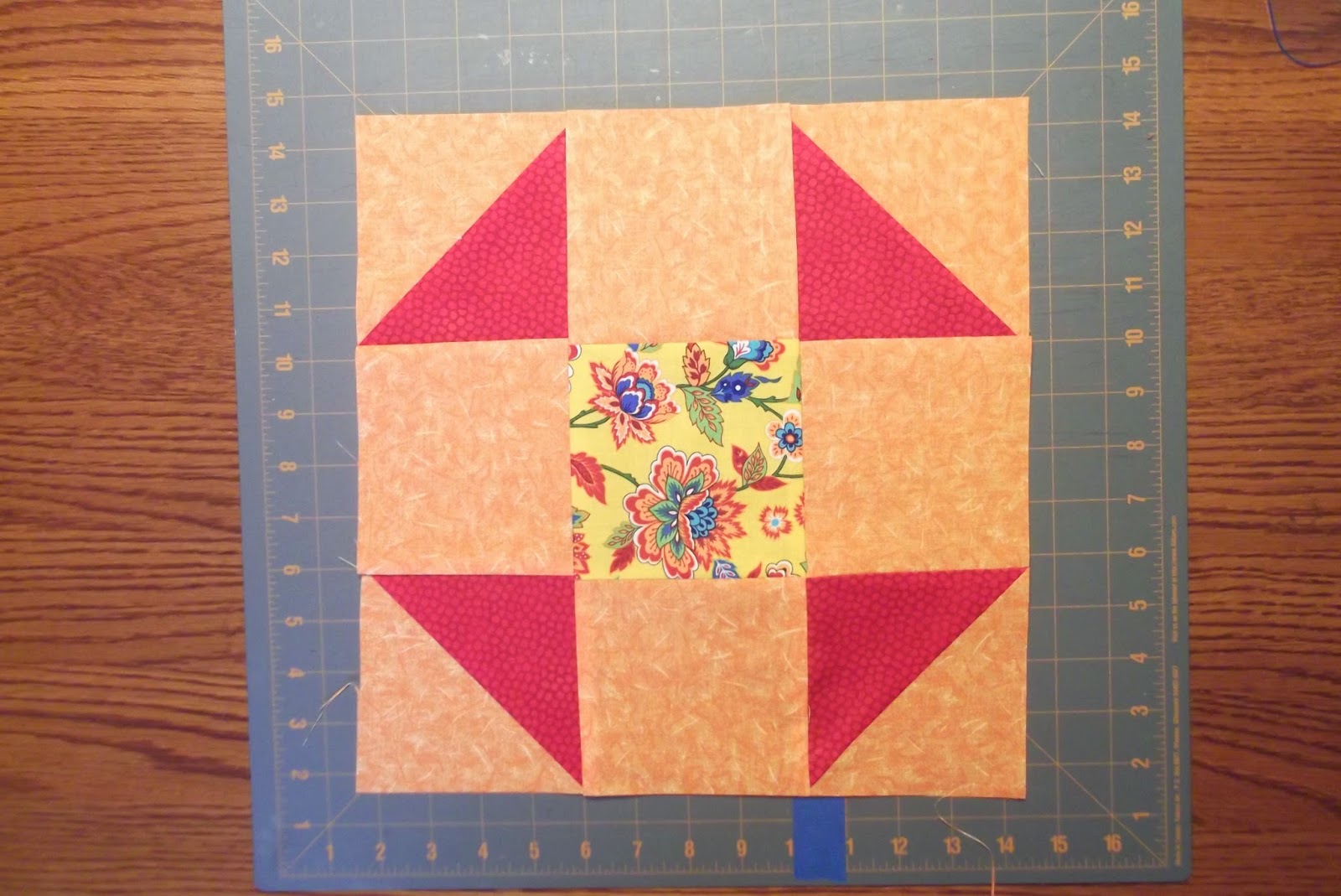 I am going to use the floral for the border and the blue will be the binding.
The red fabric has a sort of dot in it.
I should have maybe changed the orange with the floral.
I can't say I have been having fun doing this.
I really don't think that I will start doing this on a regular basis anytime soon. 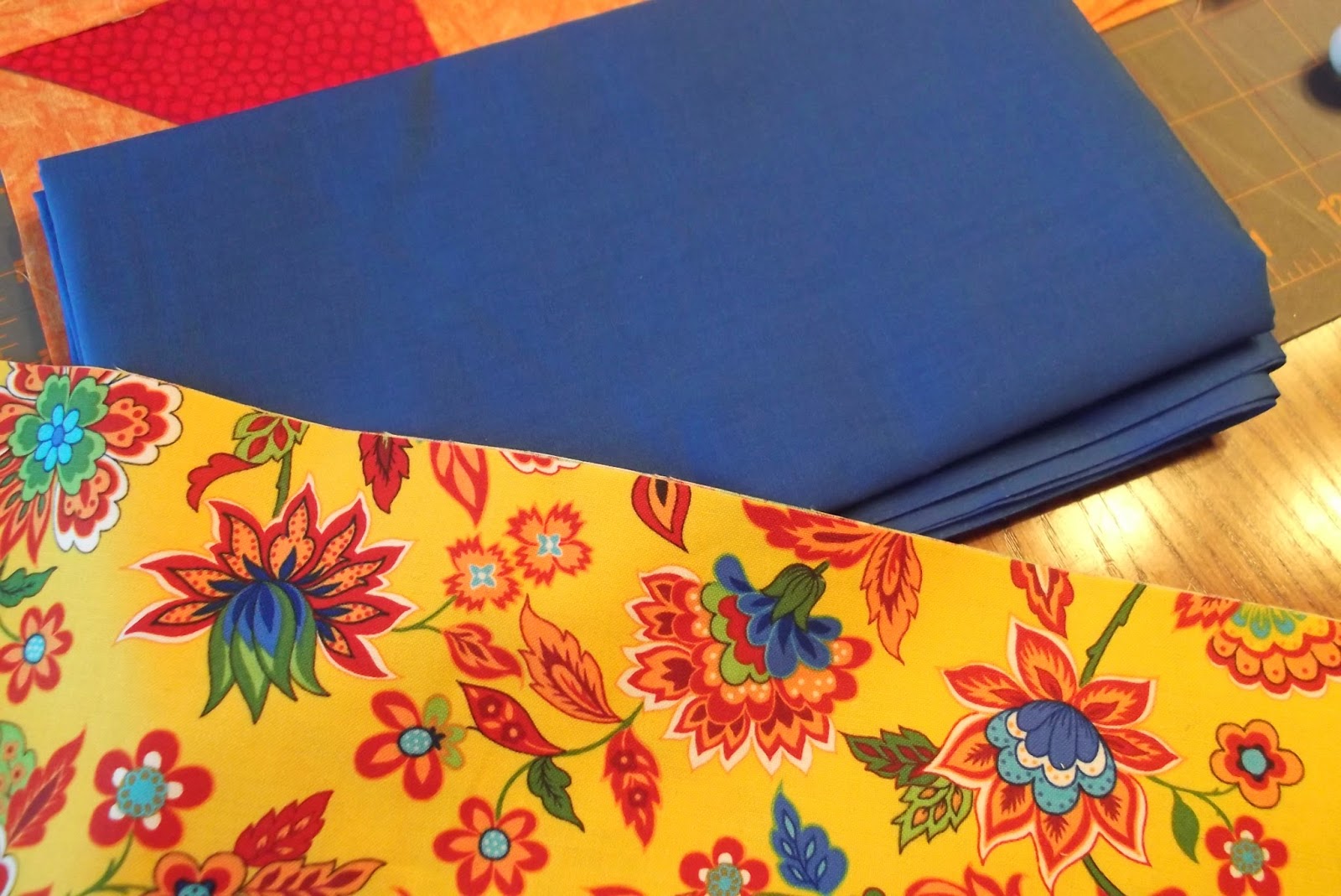 I really think that cross stitch is my passion.
I started my His Eye on the Sparrow by Heartstring Samplery. 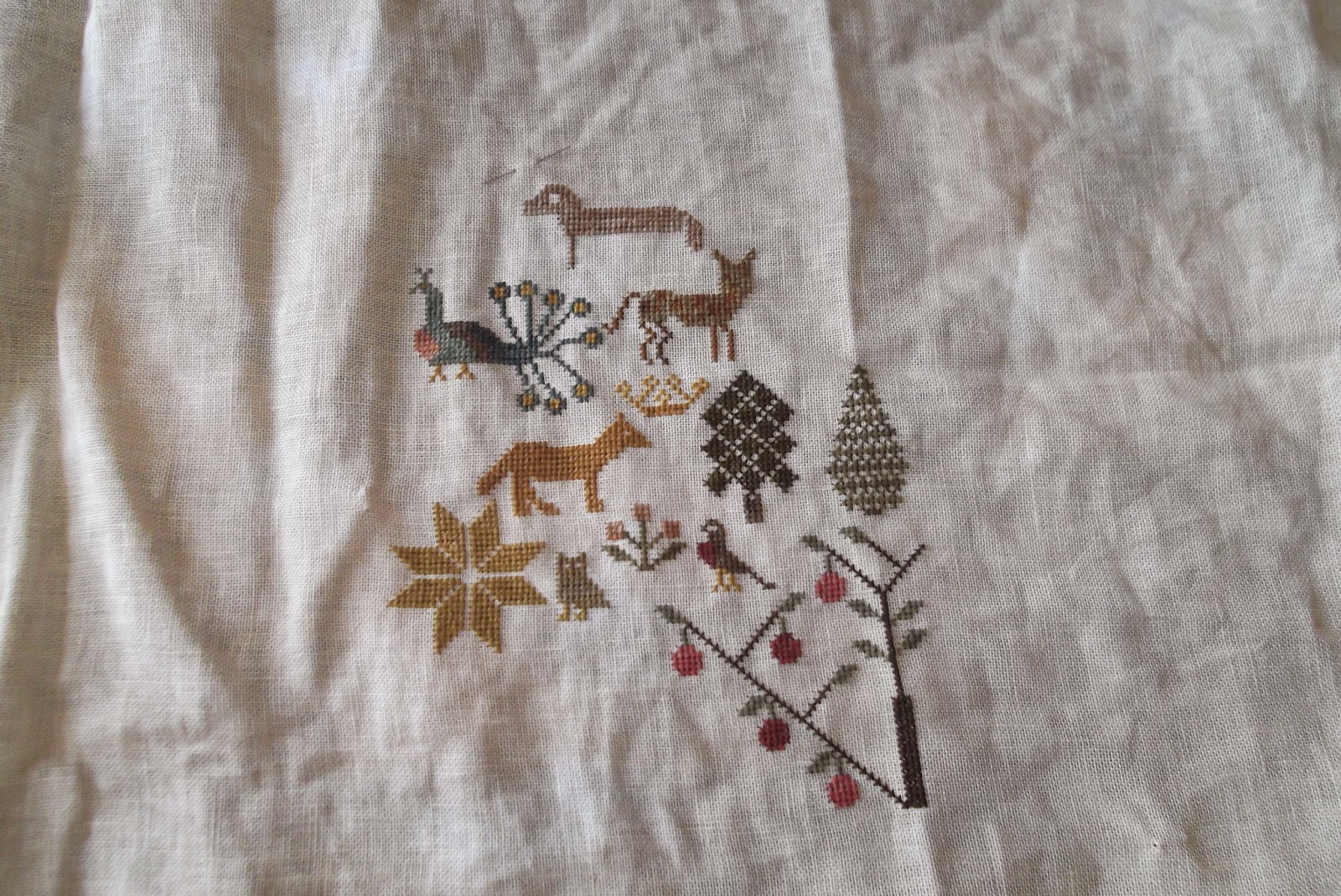 This is a really large piece.  I think finished its 31x26 but, the small motifs I think will keep it interesting.
Henry Ford is now refusing to sleep in his crated.
He has been sleeping under the bed (which is high) and dragging all kinds of things under it.
He will take the bathroom rugs, clothes, shoes and Buster's bed.
One night, he just wasn't going to give it up, taking Buster's bed.  He also tore a whole in it and pulled out stuffing.  We put Buster's bed in the crate.
Later that night, Buster opened the door and slept in his bed in the crate. 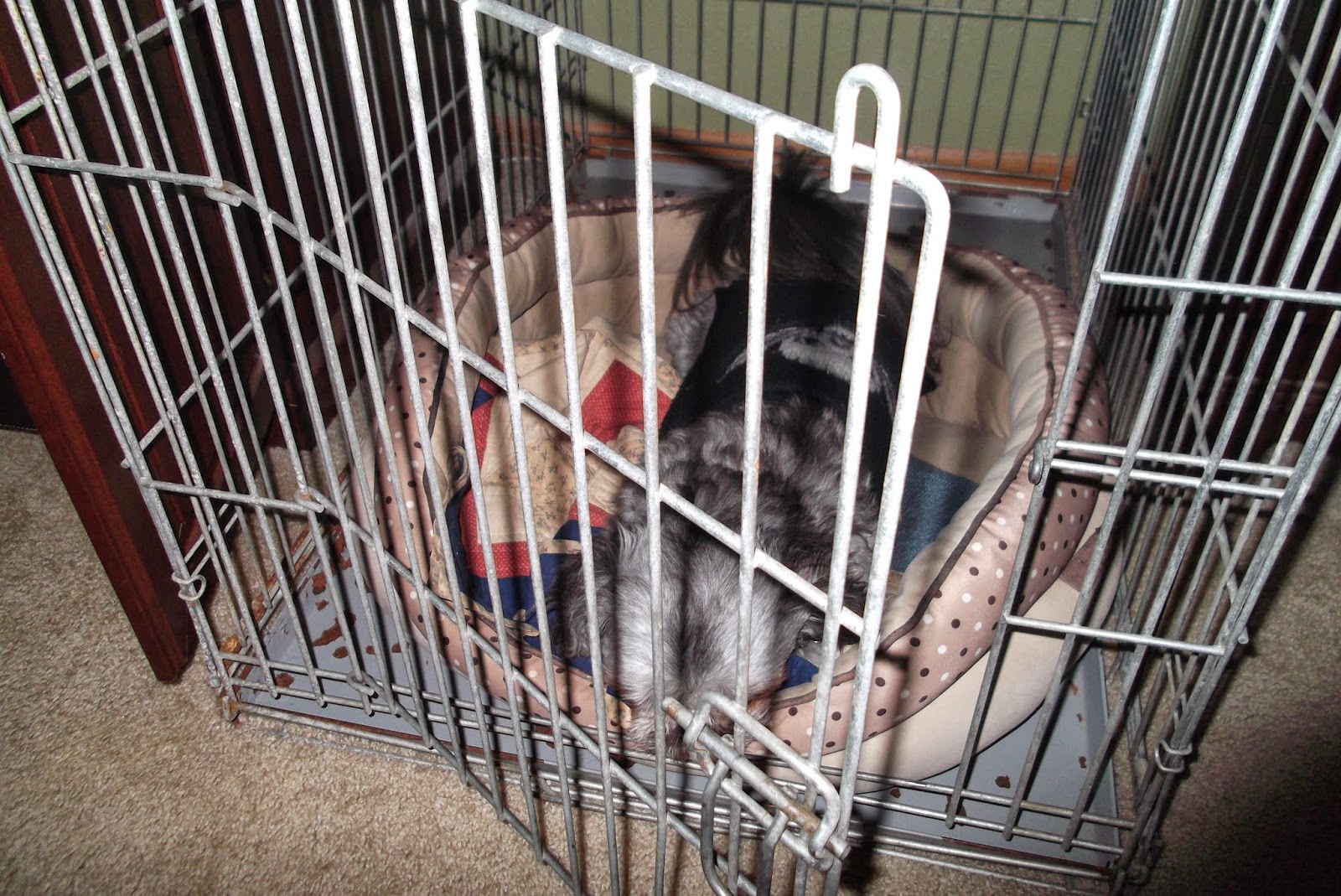 Now, we refer to it as the Shih Tzu condo. 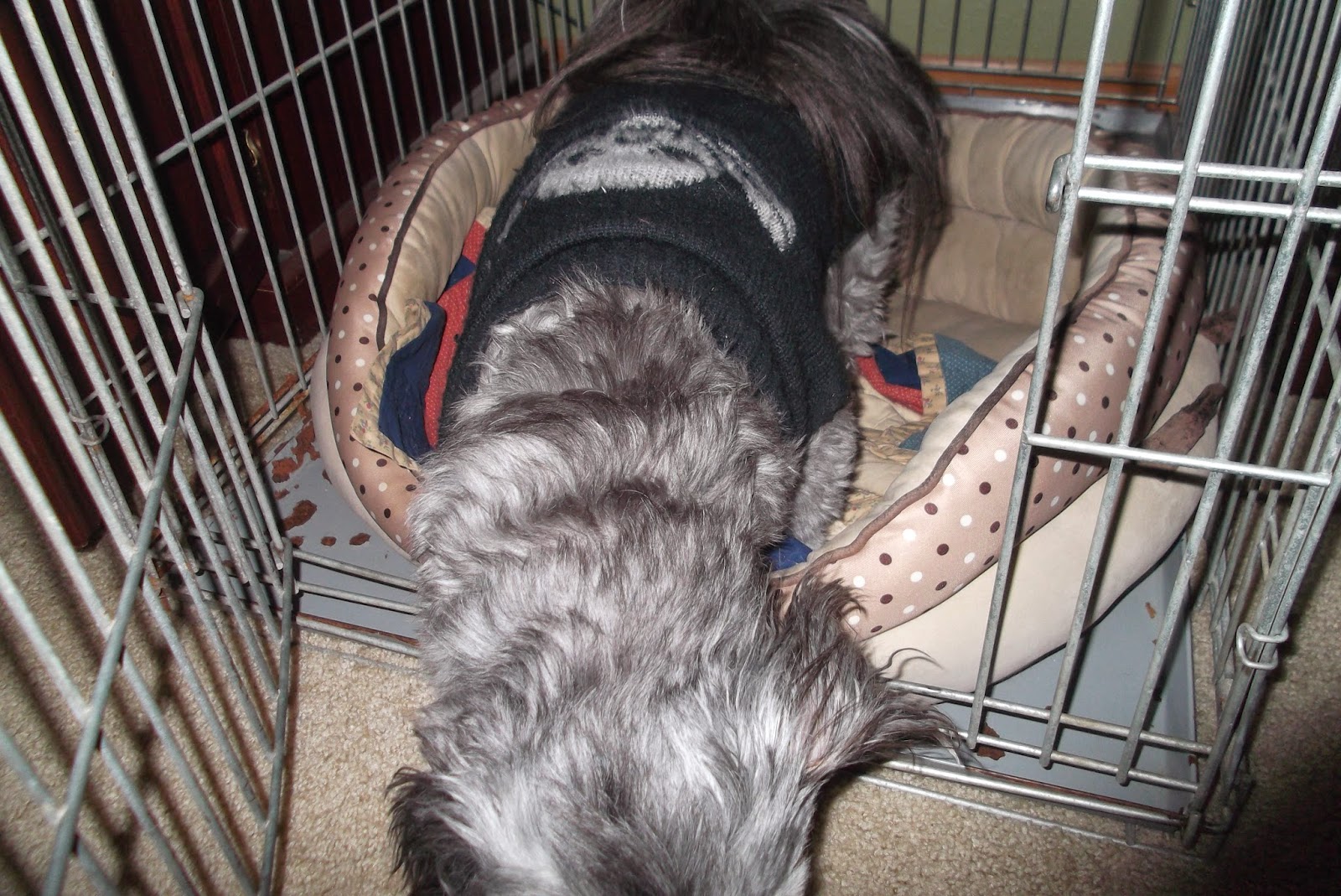 That should just about do it.
Thanks for stopping and taking the time to send me comments.
I love to hear from you.

Keep on stitching
Have a great weekend.
Monica
Posted by Monica at 3:08 PM 1 comment: