Bob was weeding the front bed and as he walked past a cedar bush a little bird shot out.
Being the nosy Nelly he is, he had to investigate
We have a little birds nest in the bush with four of the most beautiful blue eggs. 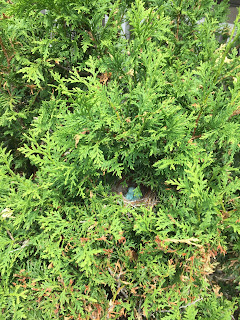 Zoomed in on it.
The nest is maybe three inches across.
We need to leave it alone now and will.
The work is done. 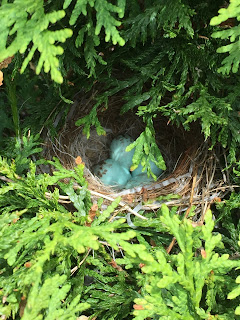 Got the rest of my pots planted yesterday.
Just waiting for them to grow.

Finished the third part of WTN&T Summer Schoolhouse series.
One more to go.
They go fast but at the same time, seem to take forever.
Frogging is next to impossible.
I had the "Remember" in the wrong spot so, had to rip it all out!  :( 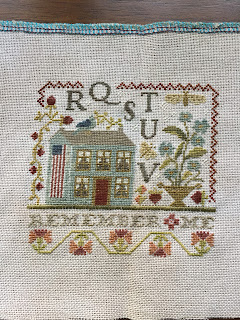 I will be working on my sister's Birthday present so there will be limited posts on that.
I will have other things to post.

I was so happy to have a long weekend!
One of my co-workers is on maternity leave, the other's mother passed away last Tuesday.
The funeral is tomorrow and she plans to be off the rest of the week.
Needless to say, its been hopping.

Have a wonderful week!
Keep on Stitching.
Monica
Posted by Monica at 4:00 PM 5 comments:

I have had the devil's own time trying to get pictures on my blog post today.
Usually, there is no problem with Google photos but, today it doesn't hand to save anything.
I took these pictures on Friday of whats blooming in the garden.
Apple blossoms are so pretty and plentiful on one tree and not so much on the other. 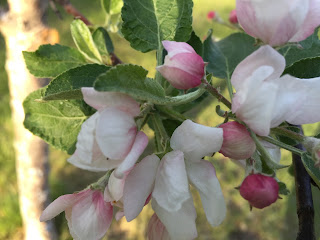 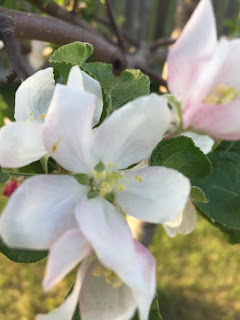 The Rhododendron is bursting too! 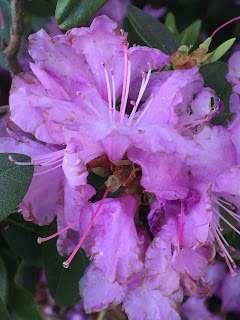 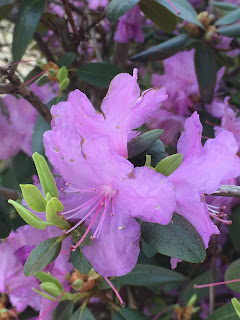 The bumblebees are on a feeding frenzy.
There are dozens at a time feasting. 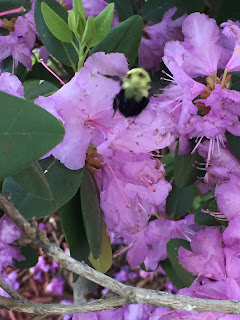 Progress on Part 3 of WTN&T Summer Schoolhouse .
It is coming right along! 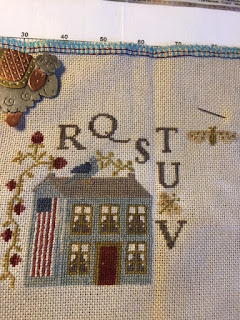 Fabrics I picked up at the quilt store to make a dresser cloth for the newly decorated guest room.
I think it matches quite well.
It was hard to find the right grey especially since I left my swatch sheet home.
I think I managed very well.
I spent the afternoon cutting and sewing. 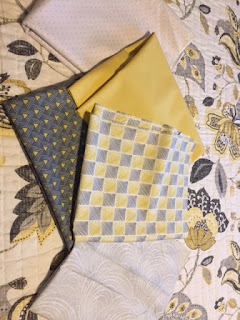 The final result.
You may need to zoom in. 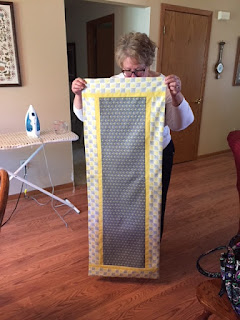 It has been another busy weekend.

I don't know if you've been watching Little Women on Masterpiece Theater, if you haven't you really missed an exceptional production.

Hope you have been enjoying good spring weather.
We have had an excellent weekend.

Have a wonderful week
Keep on Stitching
Monica
Posted by Monica at 5:57 PM 5 comments:

I think I have had an epiphany.
Let me explain.
I though about going to the Stitching Bee this weekend but, decided I really didn't need to spend money.  (Thats a whole nother story)
I was thinking why the pull?
I can't contain myself when it comes to buying patters.
I was wondering 'why is this'?
I think I figured it out.
I want to finish projects fast but, it just doesn't work that way.
I think you get just as much as a rush buying a pattern as finishing one.
You just can't finish them fast enough


I started WTN&T Summer Schoolhouse #3
I love the way they look but, they take time to complete 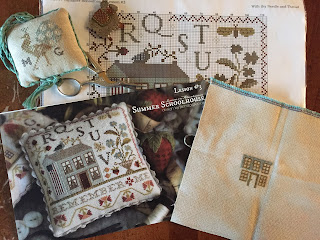 I am making progress
These turn out so great! 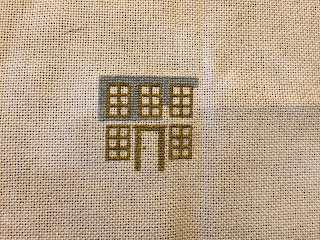 Hope you had a good Mother's Day.
I did.
Bob always helps at church with the Mother's Day Breakfast.
I much prefer to stay home, drink coffee, watch CBS Sunday Morning and stitch.
My son took me out to lunch and got me a bluetooth speaker.
My ancient I Touch and speaker dock have just bit the dust.
This speaker is really slick and works well with my phone.

For some of you, stay dry.
For the rest of us have a wonderful week.
Keep on Stitching
Monica
Posted by Monica at 6:02 PM 5 comments:

Since we got back from Traverse City, we have been working our butts off.
We have been working on turning Katy's room in to a real guest room.
Bob has painted the walls and I started to chalk paint some of the furniture:  the bed frame, dresser and a side table I found at The Restore.  .
Let me tell you, chalk painting isn't as easy as they lead you to believe.
I read stuff on line, and watched videos on Youtube.
I thought I had this ...boy was I wrong.
When I first went to Ace Hardware the paint was $36 a quart.
I figured I would need at least two, maybe three quarts.
That was more than I wanted to spend.
One video assured me I could use a less expensive brand.
I went to Walmart and bought the Kilz brand...reputable company, good reviews...checked it out.
Got the finishing wax since it was a guest room, not heavy use so, could have used that.
Bob said, "Just get the spray. It will be a lot easier."
There are spray chalklike paint.
Worked hours painting last Sunday in the garage until I though my feet were going eto fall off.
While it was wet, I thought, "Cool, I got this,"
Boy was I wrong.
You could see every brush line! No problem one video said, the second coat will fix it
The next day, once it was completely dry, there were drips.
Couldn't see them while it was wet.
Bob said, "You should have used the spray."
So I packed up the unused can of paint and the wax.
Went back to Walmart and exchanged it for the Rustoleum spray.
It didn't say anything on the can about sealing it, so decided to keep the wax.
Bob sanded the drips smooth and applied two coats of the spray.
Once it had dried for a day, we tried the wax.
The wax took all the spray paint off!
We only tried it on a side rail of the bedframe.
Went to back to Ace to talk to the paint lady who wasn't there the first time I went.
I confessed I had bought a less expensive brand and told her what had happened.
The Amy Howard brand of spray paint doesn't come off with wax.
I decided to try the bees wax they had.....took the spray paint off.
Called Rustoleum to ask if there is a sealer recommendation because the can AND the website didn't indicate anything.
Yep, got to buy the clear chalk paint sealer, spray to spray, or brush on with brush on etc.
That does seem to be working.
The bedframe is done and up and actually turned out good.
Not going to post pictures until Katy comes home and sees it.
Overall the room is looking amazing!

Inbetween the paint drama, I finished another piece from the Summer Schoolhouse finishing part two.
Now working on a Christmas present, so can't post that either. 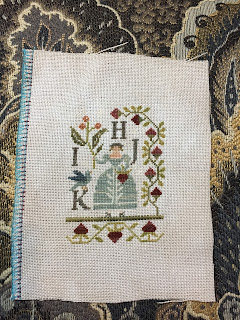 Got my copy of Hands Across the Sea Sarah Braizear 1829 Sampler.
This is my first from this designer and it was beautifully printed and packaged!
There's a bookmark with a tassle and thread key with conversion, how handy is that? 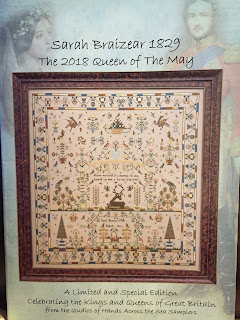 To top off the weekend, Bob cooked tonight!
Chicken thigh quarters with root vegetables in the Dutch oven using coals.
It was Delicious! 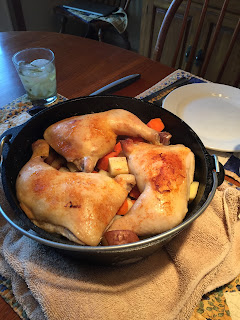 I am glad the room redo project is nearly done.
I forgot to tell you, I boxed up all Katy's stuff that she left and its now in the basement.
Packed eight small moving boxes and four medium boxes and two Rubbermaid containers.
I told her if its there in a year, its going to St. Vincents.

Well I'm pooped and need to do a little stitching.
Haven't had time to do much of that this weekend.
Next weekend, I taking some time off.

Hope you had a good weekend.
Have a great week!
Keep stitching.
Monica
Posted by Monica at 7:30 PM 4 comments: