I Can Smell The Roast Beef!


Was all excited about the Rump Roast for dinner tonight.
It smelled divine while it was cooking.
It was medium rare....perfectly cooked for us!
But, it was shoe leather!
I hate that when it happens.
Even the gravy turned out great!
We were going to have beef sandwiches Wednesday for dinner.....shoot that idea.
I have a really busy week at work since my co-worker is on vacation.
Now I have to come up with something else....BAH!!

We got a lot of cleaning this weekend.
I figured I had to do it this weekend while there is still snow and Bob can't go out to the property.
Got him up on a ladder to clean fans and the tops of the kitchen cabinets.
I washed the decorative baskets and glassware that are displayed up there.
I also rung out the rag and handed it back to him.
I got Ed to wipe the baseboards, he has young knees.....his parents do not.
When we were done, we had a little lunch.
On the way to the grocery store, we stopped at a new coffee place.
I had a Magic Mocha, it was a Mocha Latte with the spicy kick of cayenne pepper.
I think that will be my drink there.

I did putzed in the sewing room today.
I got a few things put away.
I bought some square frames at Hobby Lobby last weekend I thought I could use to re-frame
La-D-Da's Spring Hare.
I used the frame it was in for something else.
Of course the frames weren't quite the right size so, I took it off the board, cut it and re-attached it.
My lines aren't exactly the straight.....heavy sigh....I have difficulty with lines and framing.

Now for the Sarah Braizear update.
I even ironed it so it would photograph pretty.
I think this is pretty much the area I worked on this week. 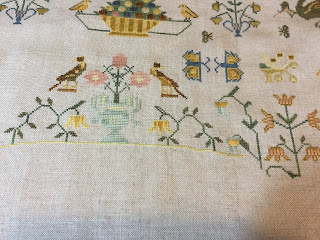 I wanted a close up of the vase 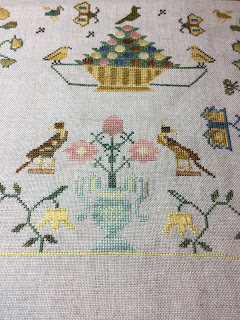 The center section
I am going to put it aside for a while.
I want to work on BBD Merrily, Merrily We Welcome Spring. 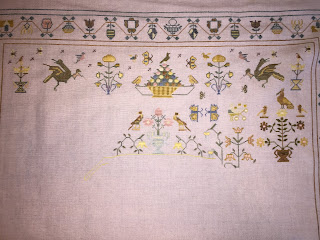 I also want to work on an Homespun Elegance There is a Garden I got from her Etsy shop.
It is a small piece that I picked some Victorian Motto Sampler Shoppe thread that looks fabulous.
I will post it next week.
It isn't on of my stitch 9 challenge list but, I don't care!
I will come back to Sarah but, I need a break.
She is large and complicated since I'm doing it on 40 count.

I hoping for a smooth week.
It will be busy.
I hope I can stay awake in the evening long enough to get a little stitching done.
Hope you had a great weekend!
Keep on Stitching
Monica
Posted by Monica at 5:54 PM 3 comments:

I have been working slow but sure on Sarah Braizear.
I think I have made some good progress since I picked it back up.
There is a lot of counting on this since there really is some space between motifs. 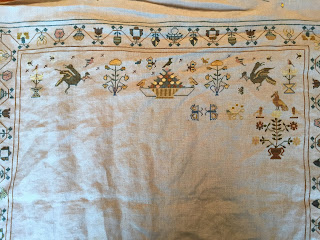 Try as I might to orient the section I'm working out, it just won't cooperate. 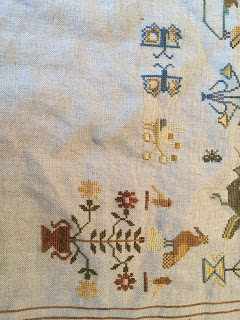 Midwest Living keeps sending me magazines along with a bill of course.
I haven't asked for the magazine, didn't subscribe.
Not going to...mostly ads.
But, I did find an interesting recipe that I may have to try.
I drink tumeric/ginger tea I get from Trader Joes that is pretty good.
To make this, I just need to get some ginger.
I think the organic coffee house charges $6 for a tumeric latte and its probably the same thing. 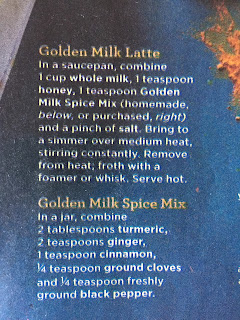 Bob and I took a road trip to Escanaba yesterday.
We are looking for some new patio furniture, so checked it out at Menards.
We stopped at an antique store and found a cast iron griddle for his shed.
I also found a large pyrex butterfly gold, now I have the whole set.
You can see what I mean: Pyrex Butterfly Gold Nesting Bowls.
I have a butter dish I use all the time and some small casseroles
Its just fun to collect it...like treasure hunting.
Then a new Hobby Lobby just opened there so stopped and picked up some square picture frames.
I put a La-D-Da in one and hung it in the guest room.

The weekend has just gone by too fast...as usual.
Hope your weekend went well!
Have a great week!!
Keep on Stitching!!!
Monica
Posted by Monica at 4:09 PM 3 comments:

Don't let this innocent face fool you.
This guy is a criminal.
I let the dogs out in the back yard...fenced in back yard.
Henry came back in and Buster did not.

With the snow banks as high as they have been, we often don't see him in the paths.
I waited a couple of minutes and called him again....no Buster.
Then I looked up and saw him across the alley at the neighbor's garbage can.
It's icy from melting snow.
I got in the car and drove to the alley, got out and called him.
Of course, he would not come.
I drove to the neighbors and rang the door bell and asked if I could go through the house to her patio.
I told her he got loose but, now he was back on the other side of the alley.
When called he did climb up on the snow and walked across the top to use.
How did he get loose? 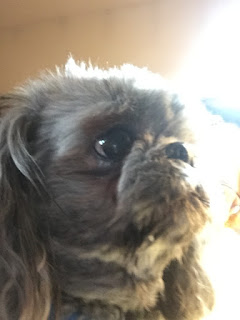 I believe this is his egress.
Because of the thawing and re-freezing, the snow gets crusty and he can walk on top of the snow.
He walks up the snow bank, hops over the top of the fence and walks down the bank on the other side.
Bob knocked down the bank today.
He was at a fishing banquet last night.
I had him on a leash all night whenever I let him out. 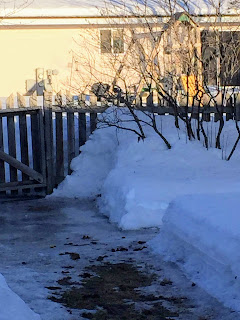 The Stitching Bee had their Market Day yesterday.
Arttie and I went.
She had some of the patterns I ordered:
Needlework Press:  Maria Davis 1823.
This one I may do in silk since it is one color.
She hasn't gotten everything I wanted yet. 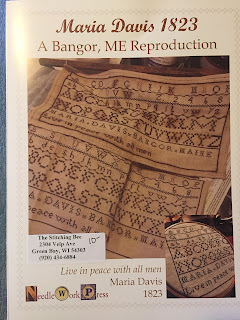 I was glad to see she had a copy of Blackbird Design.
I didn't pre-order this but, I was very happy to get it. 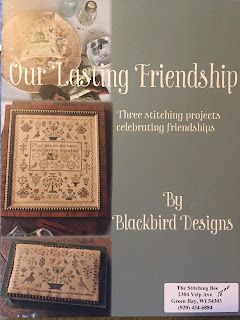 I don't know if this was new at Market but, I have seen this and really liked it.
It will be a very fun small! 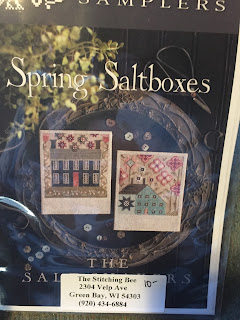 Shakespeare's Peddler:  Jenny Beane For the Parlor.
I got the first part at the Stitch Niche in Fort Worth and had Kendra get the parts available.
I picked up much of the floss, she didn't have a few of the colors.
I don't need it right now but, figured I would get what I could.
It calls for R&R Wren:  a skinny quarter of 32, 36 or 40.
I will probably do it on 36 or 40 count.
It turns out to be the same size as And They Sinned. 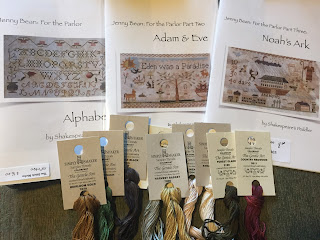 I think there are going to be eight parts. 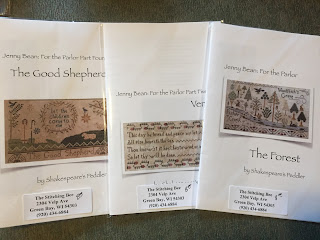 We stopped at Joann Fabrics and I was looking for circle templates for making needle drums rather than spit balling it.
It is for cutting circles with scrap booking paper but I figured I could scribe if nothing else and then cut it with a scissors or knife. 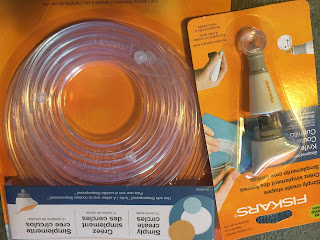 Just didn't get around to taking a picture of Sarah Braizer.
Had a busy day and had company for dinner.
Made corned beef, cabbage, red skin potatoes and carrots for St. Patrick's day.
I have never cooked a corned beef, talk about easy peasy and delish!
Hope you had a wonderful weekend.
The weather was great and snow is melting!
Have an amazing week!
Keep on Stitching!
Monica
Posted by Monica at 6:38 PM 8 comments:

I am making slow, steady progress on Sarah Braizear .
I really don't have that much time to stitch, something always comes up.
Now, I'm trying to decide to satin stitch now or wait. 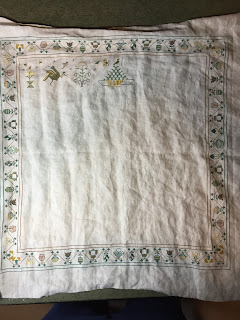 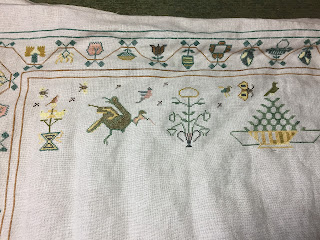 The basket of fruit also is satin stitched.
I think I will do that also.
I'm afraid I will miss something in the main body.
I had missed a few small motifs in His Eye is on the Sparrow.
I couldn't believe I did that! 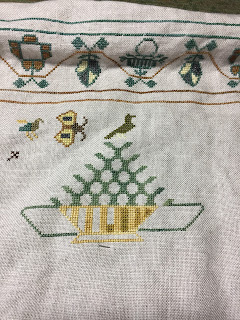 We did have another two inches of snow last night.
After tomorrow we are suppose to have some warmer sunny weather.
Let me tell you many parking lots and side walks are truly a safety hazard.
The side streets and snow and ice covered.
Its dangerous pulling out of our driveway.

Converted the DMC for a project to overdyes in my stitch nine challenge.
I plan on going to the Stitching Bee on Saturday and she should have the new market offerings.
I told her to hang on to my order if she has it and I will pick it up then.
There was a lot I liked from market but, alot that just wasn't my style.

Hope you have had a wonderful weekend.
Weather has been bad all over the country and stay safe.
I'm sure its going to be a wild spring.
Have a great week!
Keep on Stitching
Monica

Okay, I'm sure you are tired of me blogging about the weather.
It has been record breaking.
Local snow fall records have been broken.
Marquette has been discussed on the Weather Channel.
The backyard.
The snow goes to the top of the fence.
Buster has gone over the top in the past.
I don't know that he will now.
I don't think he can jump high enough to get on top of the regular banks to climb over the fence.
The backyard. 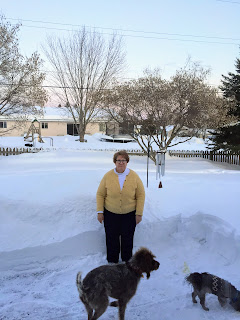 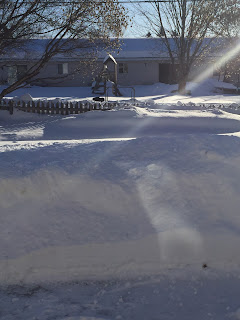 The chimnea is nearly buried. 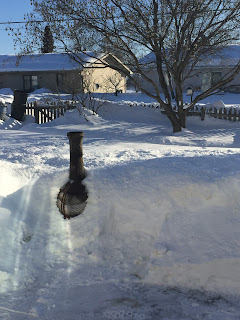 Got a good pic of the boys.
Henry collects the toys at the patio door. 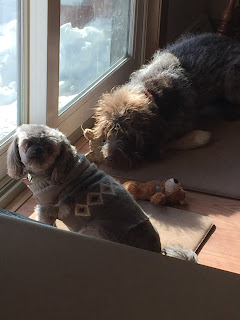 Bob and I at the bottom of the driveway with the snow banks there.
Nearly six feet. 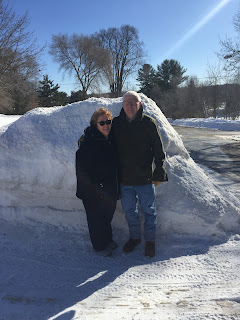 The house next door banks are even higher since the plow has pushed everything back  just in case.
We are suppose to have a cold week.
-11 tonight.....No chance the white stuff is going to melt.
We haven't had snow like this in forty years, at least, 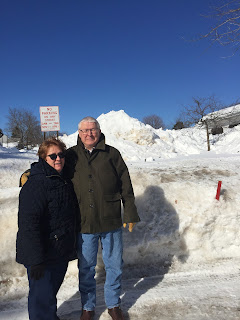 I have finished the border of Sarah Braizear.
I have to do the satin stitching but, saving that for the very end.
I am very excited to be able to start working on the main body of the sampler. 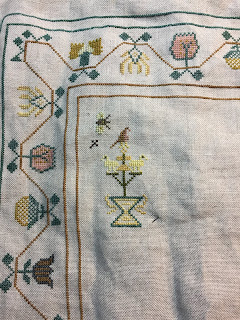 Hope you aren't getting too bored with my ramblings of the weather.
It is still better than the tornadoes in the south.
Hope you are all safe, warm and dry!
Thanks for stopping.
Keep on Stitching
Monica