I'm SOOO Excited!!
Nicola Parkman, Hands Across the Sea designs has announced she is releasing independently the Uffendel Sisters Samplers.
This is not the Limited edition initially released.
The sister were together in the limited edition pattern.
There are some differences in the set up of the background information, the designs are the same.
I just want to be able to stitch them because I fell in love with them but, was too late to the dance.
I had tried calling several shops that I knew carried her designs at that time but, to no avail!
It was very sad.
Now happy dance because they will be in my hot little hands possibly by Christmas.
They may come with me on the Stitcher's Escape Cruise this summer.
So when Theresa Verette, Kitten Stitcher was on floss tube talking about the Uffendel's and that her design Jane Philpott has a sister sampler that Theresa owns, I figured I better get that pattern...,just in case she decides to reproduce the sister.
I also love it because it is an Adam and Eve sampler and let me tell you the Adam and Eve are unique. 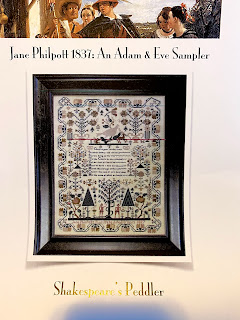 My friend Arttie has a cottage business.
She quilts.
She makes quilt samples that you see in catalogues for specific manufactures.
She also will quilt for hire...tee shirt quilts and other memory quilts among other quilts.
She has decided to expand to finishing cross stitch.
She asked me if I had anything she could practice.
I also taught her how to make cording.
I had a couple of smalls.
I decided to do last years Little House Needleworks in a bell pull so I'm starting those over
Some day
The smalls turned out cute. 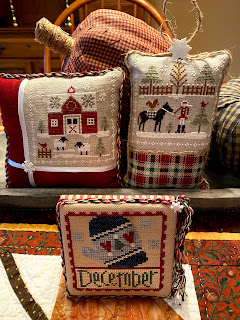 Lizzie Kate December is a flat fold.
They all turned out very cute. 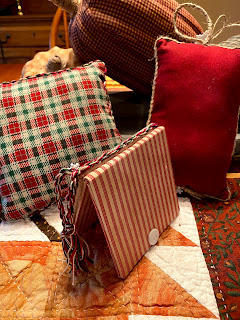 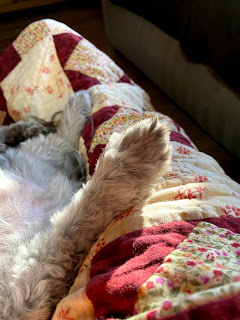 And totally sacked out on the back of the couch. 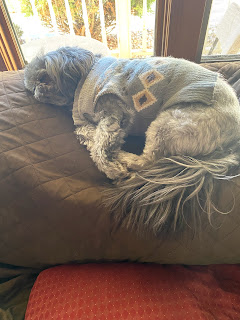 Hope you all had a wonderful weekend.  I've been diligently working on Christmas presents.
We will see how much snow we get this week.  Bob said a foot.
I think Thanksgviving night we may just put up the tree, get the lights and the beads on.

Have a wonderfule Thanksgiving.  Safe travels and hopefully the weather won't be bad where you are.

Keep on Stitching
Monica
Posted by Monica at 5:14 PM 6 comments:

I took my Blackbird Designs:  The Bells on Christmas Day and Merrily, Merrily We Welcome Spring to the Stitching Bee for framing.
Kendra's husband, Don does the framing.
Our local framer went out of business a couple of years ago not too long after I got back
His Eye is on the Sparrow.
If you ask me, framing is kind of a leap of faith.
I wasn't sure about the color of the frame.
I usually prefer wood stain but, we picked out a painted wood frame for the pieces, the same color since it looked good with both.
I got an email from Kendra on Friday about what a wonderful stitcher I am.
I got them back yesterday and I have to say....
I AM SO THRILLED WITH HOW THEY TURNED OUT!!!!
I had to post to show you all because I'm so excited! 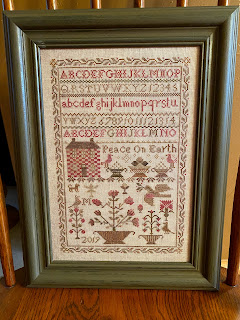 Above is The Bells on Christmas Day.
It really doesn't look all that Christmas-y so I think it can stay up all year.
I need to decide where I'm going to hang it. 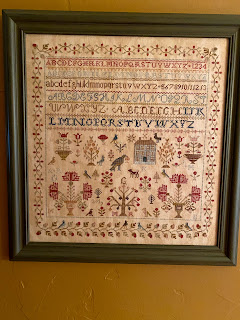 I am so glad I took them to the Bee for framing!
It is a wonderful job!

Just had to share!
Have a great day
Keep on Stitching.
Monica
Posted by Monica at 4:08 PM 4 comments:

It has been busy.
Last weekend, Bob's brother Steve was here to visit with their mom.
I really didn't have time to blog.
He left on Tuesday.
On Thursday, Bob got a call from Assisted Living that she was not feeling well and her pulse oxygen level was 68...normal is 90 or more.
He took her to the ED.
She probably had a small heart attack but, was also in Atrial fibrillation.
The doctors were able to correct it with medication and kept her over night.
She went home the following day and doing much better.
I stopped and saw her yesterday since, Bob went t camp.
She was the most lucid she had been in years.
Bob saw her today and I guess she wasn't as good today.
She is 90, going to be 91 in February.
She does have a lot of partially blocked arteries.
She doesn't want to have surgery, and her age doesn't warrant it
Her younger sister had the surgery, and didn't survive.

I finished a cowl this week with some yarn I got last spring called Bamboo Bloom Handpaints.
I have made two other ones:  one for my sister and the other for Katy.
This one is for me.
I love it! 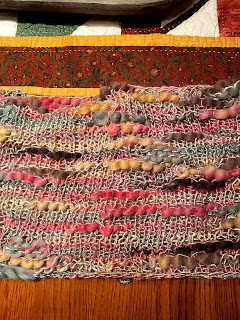 I have shown you some of these.
Plum Street Sampler Saltboxes
I'm doing them on 28 count luagana over one. 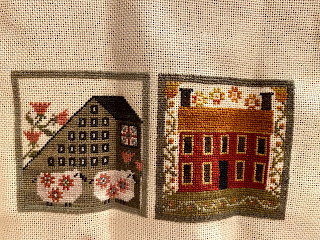 I have changed some of the colors for various reasons.
These are going to be for Christmas. 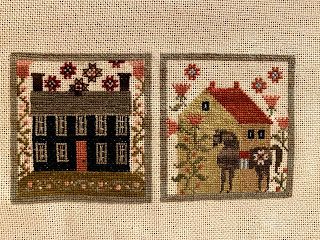 I made a mistake on the one I'm working on right now.
I used the wrong color, they were right next to each other
It is really difficult to rip the thread out. 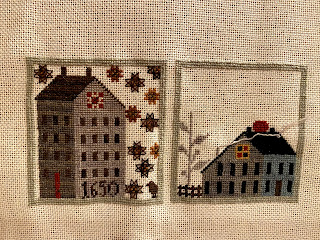 I'll post the finished product after they are given away.
I am ready to be done with these and move on to seasonal things.

I can't believe how fast the fall is going.
It won't be long after Thanksgiving to Christmas.
I bought the turkey and some of the other supplies for Thanksgiving this weekend.
Next weekend, I will be really organized and get the remaining supplies.
It will be a quiet holiday.
We'll eat early because it is a lot easier for my mother in law.
I like being able to have the rest of the day to chill.

Weather is a little more seasonal.
We had a couple of weeks of weather that was more like January rather than November.
Hope you had a good weekend.
Have a wonderful week!
Keep on Stitching
Monica
Posted by Monica at 5:49 PM 3 comments:

While I'm on my exercise bike I watch Floss Tube.
A few weeks ago, I was watching Theresa The Kitten Stitcher.
Her question to win some prim patterns was "What was your favorite Halloween costume."
I answered the Tooth Fairy.
I dressed as that when I was the Activity/Rehab Director at a nursing home.
I passed out Hersey Kisses and called them fillings (because they kind of look like that).
I was at the retreat and checked my email and found out I had won!
SO EXCITING!!
This is what I won.
I have never seen anything from this designer so I am super stoked!
I am very grateful for winning. 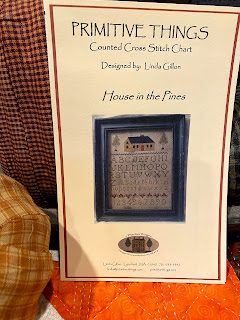 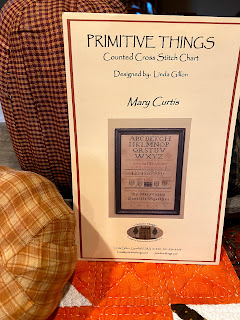 Close up of the patterns
It will be a fun quick stitch. 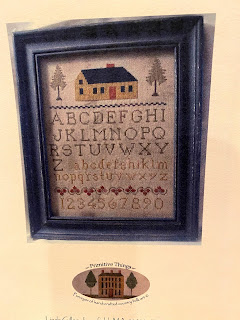 I may convert to overdyes and do it on some 54 count linen since the patterns look simple. 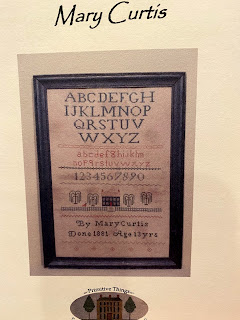 Stopped to pick up knitting needles for the shawl project I posted last week.
I probably won't start until after the holidays
She has some classes this week and these little knitted snowmen are Wednesday.
The stitching group signed up for it so we will do that instead of meeting. 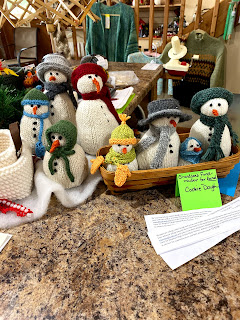 I saw people talking about this kit offered by the Country Sampler in Spring Green by
NeedleWorkPress:  Sarah Stewart Hardman that was converted to more antique colors and linen. 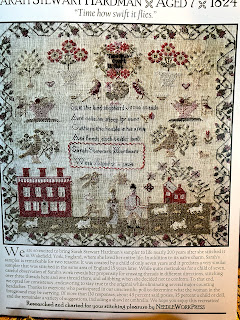 The threads are overdyes:  Crescent Colors and Gentle Arts
The Fabric is Mocha.
I am absolutely in love with this conversion. 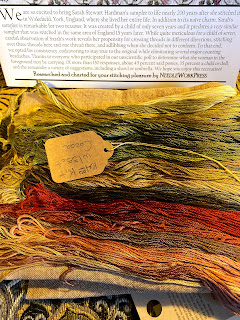 I picked up this kit when we were at the Country Sampler in April
Even though it isn't a Christmas pattern, it still looks Christmas-y 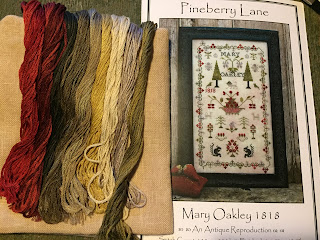 I may go back to the Little House Christmas monthly from last year.
I started it but, then after I saw it done as a bell pull, I stopped and got the fabric to do it that way.
Either way, none of it will be done by Christmas.
I am still working on Christmas presents and 2/6 are done.

It is definitely getting colder here and there may be some snow in the forecast.
Started watching the Hallmark Christmas movies this weekend and have enjoyed every minute.
Makes me want to start decorating but, not until after Thanksgiving.
Got to get some of my Turkeys out.

Hope you had a wonderful week and weekend.
Thanks for stopping!
Keep on Stitching!!
Monica
Posted by Monica at 4:43 PM 4 comments: