I have just spent the last hour trying to get the pictures from my phone to go somewhere, anywhere.
I took a picture of Autumn at Hawk Run but, it won't go to my Google pictures.
Then I cleaned off some pictures, putting them in albums and figured I could delete them.
Once I deleted them, they also were deleted from my album...WTF!
I am making good progress on Hawk Run but, may put it aside for a while
I have the itch to work on other things. 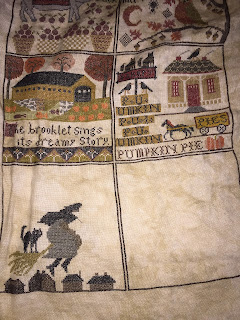 The Stitching Bee Retreat is next weekend.
It is a few weeks earlier than the past years.
We are also going to be at a new venue in Door County
We will be at Beachside Resort in Ellison Bay.
It will be a new adventure.

I am getting excited about the retreat.
It is always a lot of fun!
I don't know how much shopping we will do.
We may just decide to stay and stitch all day Saturday.
We will see.

Finally able to post this because my picture since it made it  from my phone to Google Pictures!

Hope you are having a grand week!
Keep on Stitching
Monica

We went to see Katy this weekend in Milwaukee.
We went to The History of Beer at some of the buildings left from the original Pabst Brewery
Many of the buildings and land have been sold off over the years.
These are some of the original building that were offices in the 1880's-1890's.
It was really entertaining tour talking about the early history of Pabst.
Originally started by Jacob Best in 1844, the "B" on the label is hommage to him.
His daughter married Fredrick Pabst and the stockholders had the name changed to Pabst 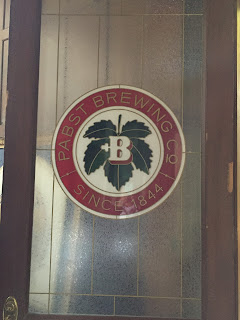 A statue of Fredrick Pabst in the courtyard where the employees often drank after work
Until the 1980's the employees drank during work. 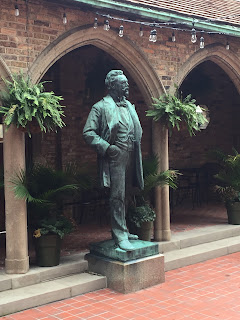 Our tour started in here that once had been a school until Pabst pretty much took over all the land around the school.
It was remodeled to look like an old Pub room in the 1940's
The fresco's around the walls were pretty amazing and explained the beer making process. 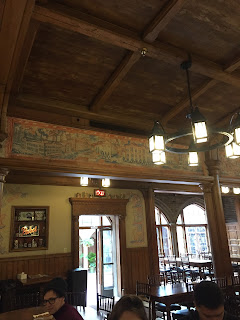 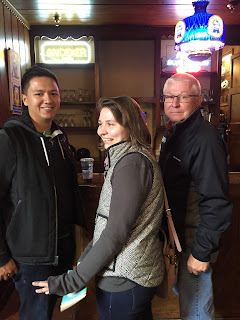 King Gambrins when we first got to the tour.
The patron saint of beer and brewing 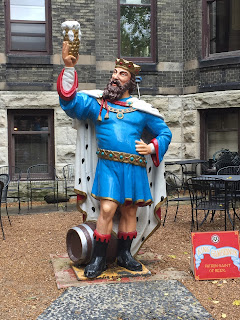 One of the stained glass windows in the 1880's tap room.
There were several German sayings around the room regarding beer and drinking. 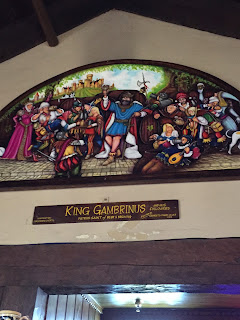 Some beer memorabilia from Schlitz, a competitor.
Love this, even better than poker playing dogs. 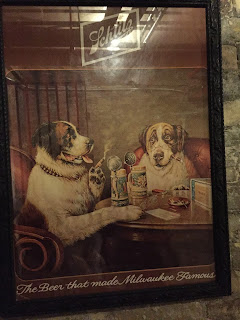 The tour was a lot of fun.
We had a wonderful time in Milwaukee with Katy and her beau.
The city has changed a lot since we moved away.

My stitching pictures haven't moved to Google pictures so I didn't post any.
Been working on Autumn at Hawk Run.

Hope you had a great weekend.
Rainy, rainy, rainy today but, the weather held up this weekend.
Keep on Stitching!