Where did the weekend go?
All of the sudden it is 6 pm??
I have been really busy.
Last week work was total chaos.
It was a short week to begin with, made even shorter with a trip to Milwaukee to the Eye Institute with Bob to meet with a surgeon for his cataracts.  We still don't have a date and the poor bugger can barely see by the end of the day.
I only was at work two days because of the holiday and the day off and I don't work Thursdays.
I had 22 of 32 hours I normally work done in two days.
Needless to say, I'm getting too old for these shenanigans!
And just didn't have that much time to stitch either
I thought I had the border done on What Remains is Love from BBD.
Then I noticed I was off two stitches and that was going to bother me if I didn't fix it.
So I spent a couple of hours ripping it all out.
Then, Sampler September started. 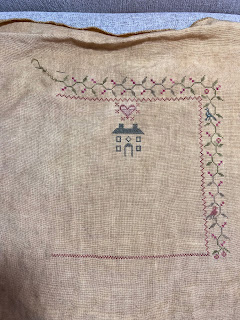 But, wait....it was Labor Day and I wanted to kit some fall stuff up.
Laura the Serial Starter enable me on this one:  October's Party.
The called for threads and 40 count Parchment 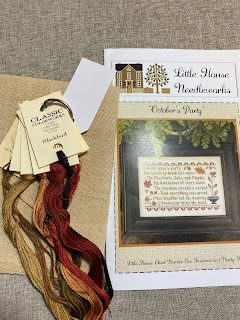 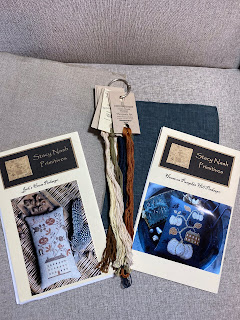 While I was working on this, I was watching on Youtube Abandon Nashville.
Love the Urban exploration videos.
Another favorite is Bros of Decay in Europe.
Buster was snoozing on the sofa and then Bob wandered in to see what I was doing.
He then got caught up in it. 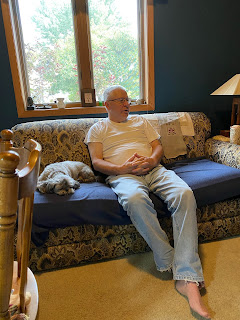 La D Da's Murder of Crows with called for thread and 36 count Mocha (I think)
I often forget to keep track of the fabric. 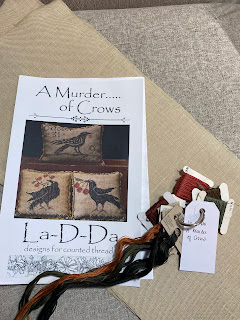 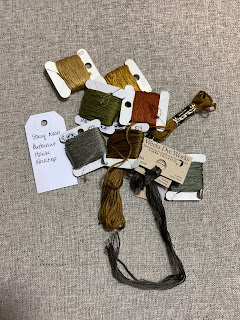 One of my clients brought me some purple potatoes and I roasted some last night.
The before picture.
The recipe I used  had you boil them four minutes then I wedged them, coated them in olive oil, fresh garlic, salt, pepper and rosemary. 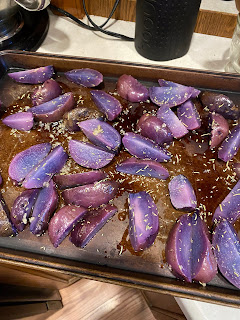 We grilled chicken and had a fresh salad with Romaine, tomatoes and mandarin oranges. 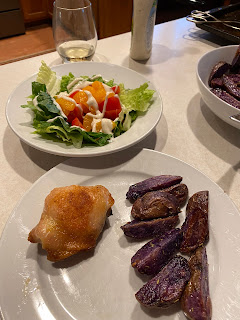 I started Hannah Pepper I think two Septembers ago.
I don't think I worked on it last September....maybe I did....I should go back and look.
I really do love working on her and she is beautiful.
I should be working on her beyond September but, as you can see I have a lot of stuff I want to work on in the near future.
I may pick her back up in January....who knows.
Got to stay away from those SAL.
I overdyed a piece of fabric for this.
I initially had a great piece of fabric but, cut it wrong....stoopid, stoopid, stoopid.
The next piece wasn't grungy enough for me so I overdyed it. 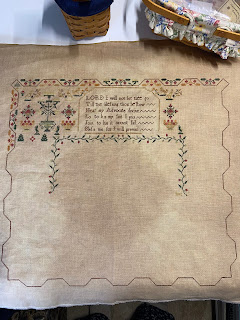 What I've been working on.  I have the pot and the greenery done since I took this photo. 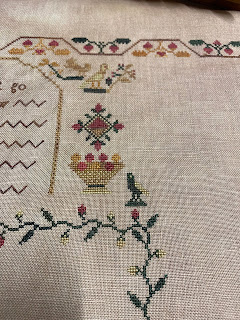 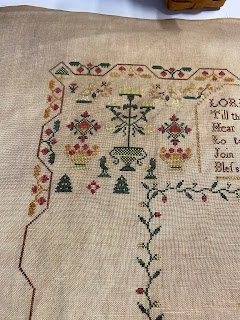 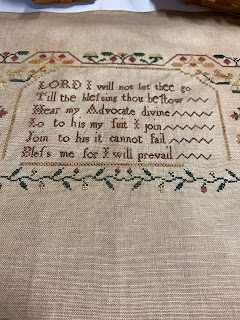 I was suppose to be off the next two weeks and we were going to drive and see my sister and her husband in NC.  Since Bob's eyes are really not doing well enough to drive unfamiliar roads, and I didn't want to drive all that distance myself, we decided to postpone the trip until later.
I'm really disappointed!  I so wanted to go to Sassy Jacks but, is she in the new building?
I decided to work this week because it so wacky the last week and I'll take off the week after.
I will probably be taking days off when he has his surgery because of the distance and he will need to be seen the following day.
Well that sums it up.
Stay safe, get vaccinated if you haven't and wear a mask indoors.
Have a great week!
Keep on Stitching
Monica
Posted by Monica at 4:34 PM