I posted this a while ago Carriage House Samplings Adam & Eve Revisited.

This was a super fun stitch and had seen someone else doing it on Instagram and was able to order it as a PDF.  I did during the height of the the quarantine.  This is done on 40 ct fabric. 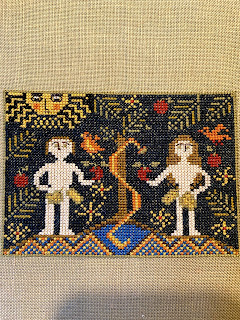 The Stitching Bee was having a frame sale.  When I called, Kendra had a red frame that was the right size.  It was pretty much an apple red but, I knew I could tone it down with a little Briwax.  I have used that on a lot of things.  It was stain and bee's wax.  I smear it on, let it sit a few hours....longer for darker and then buff it off with a cloth.  It shines up quite nice! I got it mounted on a piece of cardboard and laced up today. 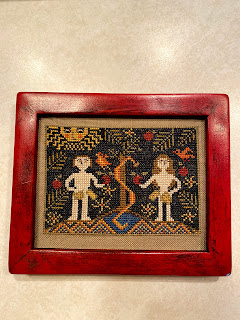 I finished Samplers Rememberd Sampler Roll and ironed it up while I was ironing the other pieces again today.  I plan on finishing this into a needle drum rather than a needle roll.  I think I would like it much better as a drum.  It will make a rather nice drum! 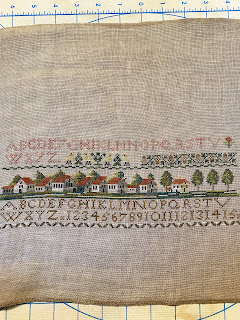 I finished the Love Bird Pinkeep from the Blackbird Designs Book Vintage Inspiration using the fall colored 100/3 silks from this months Silk club offering.  I did it on the Victorian Motto Sampler Shoppe linen club from July which was kind of a peachy hue that some people had over dyed.  I used the original color and it turned our really lovely.  The picture really doesn't show the true color. I tried. 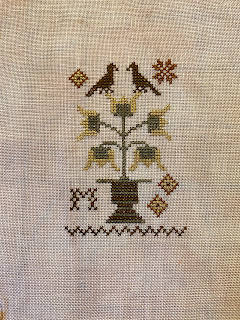 I wanted to be able to fit the piece into a small frame from Homespun Elegance that I have a few little pieces I swap out of it.  When  I saw the color of the floss, I knew I needed to find a little something to stitch and put into the frame.  Other than the color, the only thing I changed in the pattern was the small border around it.  I thought it might end up too big and wouldn't fit in the frame.  I'm pretty pleased with how it turned out.   If I had done border, I would have altered that too to make sure it fit. 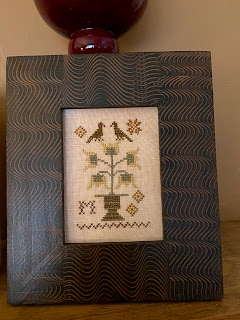 I had done the first two in the nine part Farmhouse Christmas series from Little House Needleworks.  When I had seen it finished as a bell pull, I slammed on the brakes and now have started it over on one piece of linen.  Its a Weeks not on Zweigert in a Parchment I think, don't quote me on that.  I'm going to use this as my September Christmas piece. 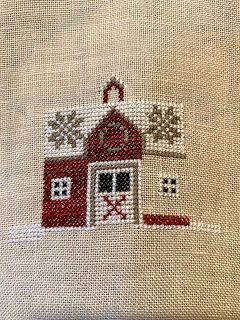 It rained all day yesterday but, today was a perfect day, sunny and 67.  I got a lot done!
Hope your weekend was wonderful.  Have a great week!
Keep on Stitching
Monica
Posted by Monica at 5:03 PM