Just Don't Know What To Do

Hard to believe that September is nearly over.
It is sooo weird.
The temperatures have been in the 70's to 80 but its dark by 7 pm.
Trees are starting to turn but, just starting.
I'm not complaining.  It's just so weird.
I believe in global warming.

I have been thinking about what to make for my stitching groups Christmas presents.
I'm just dry, nothing, and uninspired.
I just don't know what to do....so if anyone has an idea.
I have done pre-blog:  altoid boxes, sew gadget with a stitched case, notebooks with stitching on the front, candle wraps out of perforated plastic (that was tough on the joints), and a stitching bag, to name a few.

These were calendar covers with a dayplanner calendar, Drawn Thread, I did the months they were born in 2011 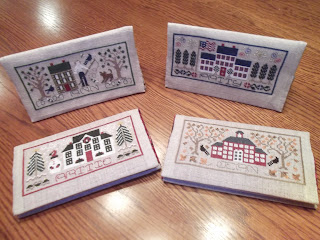 A wooden box, With Thy Needle and Thread with needle books, scissors fobs and a scissors. 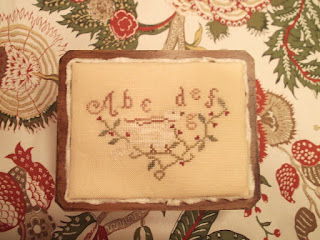 Had a box and trappings leftovers and did it as a drawing.

2013 was bracelets.  These beads I thought were really cool.  Don't know that anyone wears them.
Maybe not such a good idea. 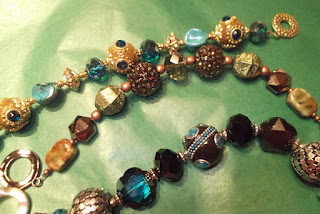 2014 was a project bag, another With Thy Needle and Thread.  I think this did turn out awesome. 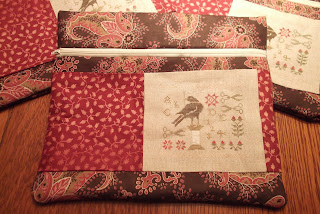 So here it is guys,  I think I may actually just buy something. (GASP)
I just haven't seen anything that really floats my boat.
I think a lot has to do with just dealing with moms and having to quilt.....(ugh!!)
If anyone has a good idea, let me know.
I think I'm tapped out. Should have had a drawing for that.
Got my Pandora playing my Steely Dan station and Gerry Rafferty is playing.
Takes me back to college days.

That about wraps it up.
Keep on Stitching.
Monica
Posted by Monica at 5:05 PM 3 comments:

Breathless Anticipation....And The Winner Is 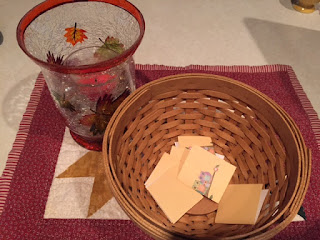 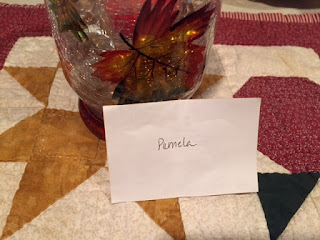 Congratulations Pamela!
Everyone have a great stitchy week!
And a wonderful first day of Autumn!!
Monica
Posted by Monica at 5:27 AM 3 comments:

Couldn't Think of a Clever Title.

I have put away His Eye is on the Sparrow for a while.
I love stitching all things fall:  fall, Halloween, Thanksgiving.
I also enjoy Christmas pieces.
From now until after the Holidays, I will most likely be stitching those things.
This a quick little stitch from Hillside Samplings called Bittersweet Farm.
I started it last week and it is going fast.
I just have to finish the hill infront of the house, the pumpkins, bittersweet border and a little back stitching. 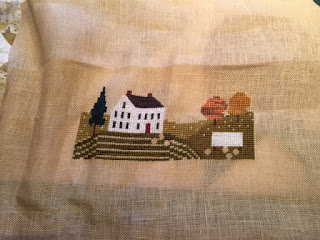 I thought I would add a few pics of the boys.
Henry Ford has been out of the woods so he has some burrs stuck to him.
We are gradually getting them out with help from Cowboy Magic used on horses.
Someone told us about this years ago when Huck had them. 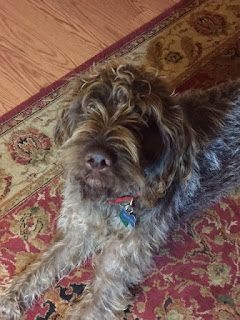 Then there's Buster.
I don't know if you remember the Schwepps Man but his 'stache reminds me of him. 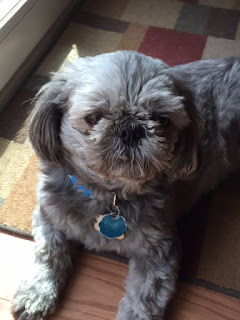 Then my mom has been working on a quilt.
It is a simple square.  She had tried doing a split rail but,  that wasn't working so good.
She kept sewing the strips the same way rather than making a 3 strip square and turning it.
She has been fighting with this for a few weeks.
When I stopped to see her yesterday, she had one of the CNA's trying to figure out what was wrong with her machine.
There wasn't really anything wrong with the sewing machine.
You know how there is that little slit on a spool of thread to hook the end, the thread was caught on that.
She had all the stitch lengths, tension and whatevers all screwed up trying to fix what was wrong.
I fixed it, turned the spool around and got everything adjusted and it sewed just fine.
I did offer to take it home and finish the last few rows.
On thursday, when I stopped she was trying to pin a row that she hadn't sewn the squares together yet.  Some of the patterned pieces are wrong side.  It is hard to tell the difference.
I finished the last few rows 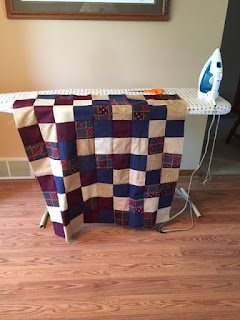 I also have it layed and pinned ready for hand quilting.
Its just getting too hard for her to sequence things.
I wrote everything down for her.
My aunt had the squares pinned for sewing and the rows numbered.
It was starting to get to her. 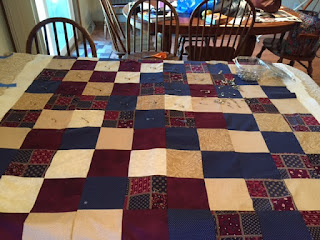 Hope you had a good weekend.
Keep on stitching
Monica

No pictures today.  I've been working on the Lizzie Kate Mystery Sampler and until its done, its a mystery.

It has been a busy day.  I did hem two pairs of pants and started logging charts into my Xstitch app for my IPhone.  I don't know if I will do the the thread or not, maybe, haven't decided for sure.  I am anxious to see just how many charts I have.  I'm telling you its a disease.  I have logged in 59 so far and thats just in one basket.  There is a lot more to come.

Haven't had to cook today since Bob is prepping for his colonscopy tomorrow.  I have to schedule mine.  I figured 6:37 was when things were really going to start happening.  Nope, not yet.  Could have started a Pooh Pool.  I'm just bad and maladjusted.

Have a great week.
Keep on Stitching
Monica
Posted by Monica at 4:50 PM 4 comments:

Another Give away from Victorian Motto Sampler Shoppe

Another lovely floss collection give away at:
Victorian motto sampler shoppe
Check it out.
Posted by Monica at 4:02 PM No comments:

I have been a bad blogger.
Not entirely my fault, just too much going on.
I sometimes don't have the gumption to blog.
Maybe it should be more "pay it forward."
I actually won this as a give away from Samplers and Santas and knew I would pass it on after I stitched it.
However, its not just the pattern.
I have included a piece of fabric I used to finish the pinkeep with and a few other little doodads to embellish the piece if you are so inspired or keep for something else. 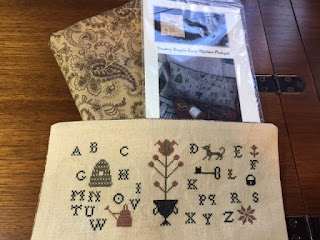 Hope you had a wonderful Labor Day.  I still labored on my sewing room, trying to put things away and clean out the extraneous stuff that came in the sewing table I got from my MIL.

Have a wonderful week....and its a short one!!!Keep on Stitching
Monica